In addition to her amazing wildlife safaris, Uganda is also a well-watered country with nearly one-fifth of the total area covered by open water and swampland. Discover four of East Africa’s vast Lakes including Lake Edward, Lake Albert, Lake Victoria and Lake Kyoga that lie within Uganda or on its borders. The southeastern corner of the nation is dominated by Lake Victoria– the second largest inland freshwater lake in the world after Lake Superior that feeds the upper waters of the Nile River referred to in the region as the Victoria Nile.

There are a number of factors interestingly common between Uganda’s major lakes namely; Lake Victoria, Lake Albert, Lake Kyoga and Lake Edward. They’re all world-famous lakes in East Africa’s great region, they’re all fed by mighty rivers, and they all have not changed much in more than 100 years. They’re also part of a drainage system at the roof of the continent, as water from this region flows up to Mediterranean Sea. Lake Victoria drains into the Nile River-the world’s longest river. The over 4000 miles long river starts high in Jinja at the mouth of lake Victoria and travels northwest up to Egypt.
Explore the splendid open water bodies of central Uganda dominated by Lake Kyoga and its extended finger lakes including Lake Bugondo, Lake Opeta and Lake Kwania surrounded by swamplands. Lake Kyoga Basin’s lakes are all shallow, usually reaching a depth of only eight or nine meters and Lake Opeta forms a separate lake during dry seasons. Lake George, Lake Edward and Lake Albert occupy troughs in the western Rift Valley along the border with Democratic Republic of Congo.

River Nile Leaves Lake Victoria in Jinja at Owen Falls and descends as it travels toward the northwest widening to form Lake Kyoga. River Nile is later on joined by one of the tributaries Kafu River from the west before flowing north to Lake Albert. From Lake Albert, the Nile River is acknowledged as the Albert Nile as it flows to the Sudan border. Visit other dazzling Uganda’s rivers including the Katonga River that flows westward from Lake Victoria to Lake George. From the north, the Semliki River flows into Lake Edward where it drains parts of Democratic Republic of Congo (DRC) and forms a portion of the Uganda-DRC border.

East of Lake Albert, impressive waterfalls occur at Murchison Falls on the Victoria Nile River–the narrowest point on the falls where waters of the Nile pass through an opening barely eight meters wide. One of the tributaries of the Albert Nile–the Zoka River, drains the northwestern corner of Uganda, a region still popularly known as the West Nile although that name was not officially recognized in 1989. Other major rivers include the Achwa River in the north, the Pager River and the Dopeth-Okok River in the northeast and the Mpologoma River, which drains into Lake Kyoga from the southeast.

Most well-known crater lakes are located in the western part of western Uganda! Rain is completely responsible for filling up this lake, making it a clear source of fresh water. 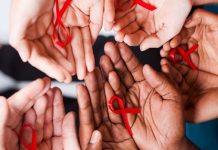 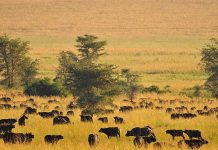 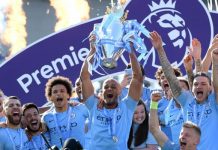 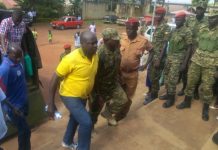 Kitatta convicted of unlawful possession of firearms, to be sentenced on Tuesday