As one of the most accepted and admired game reserves for anyone with a keen interest in wildlife safaris, stunning nature and attractive view, Queen Elizabeth National was long-established in 1954 and named after Queen Elizabeth II of United Kingdom. Geographically, the park runs from the foothills of the Rwenzori crater in the north to the shores of Lake Edward to the remote Ishasha River in the south, Lake George and Kazinga Channel, combining a widespread diversity of habitats like savanna, wetlands and lowland forests amongst others.

The Park is prominent for its wildlife like hippopotamuses, elephants, leopards, lions and chimpanzees and many others and it is a dwelling place for over 95 species of mammal and over 600 species of birds. The park is distinguished for its volcanic features, comprising volcanic cones and vast craters, many with crater lakes such as Lake Katwe where a lot of salt is mined.

Queen Elizabeth national park has Maramagambo Forest and borders with Kigezi and Kyambura Game Reserves, Kibale National Park plus the Virunga National Park in the Democratic Republic of Congo (DRC) and Kasese lying on its north-western section.

BIRD WATCHING TOURS
The main camp at Mweya is attractively positioned with fine views of the Rwenzori Mountains a number of extensive bush species may be seen in the environs of the airstrip. Along the airstrip, you watch for the African Mourning Dove, Grey-capped Warbler, Grey-headed Kingfisher, Yellow-backed and Lesser Masked Weavers, Swamp Fly-catcher, The Beautiful Black-headed Gonolek, Red-chested sunbird, Slender-billed, Pin-tailed Whydah and brimstone Canary, Gabon and Slender-tailed Nightjars.

The Kazinga channel is a crowd-puller for water birds, a launch cruise on the channel exposes bird species like the Great-white and Pink-backed Pelicans, Great and Long-tailed Cormorants, Common Squaco Heron, African open-billed Strok, White-faced Whistling and Knob-billed Ducks, African Fish Eagle, Black Crake, African Jacana, Water Thick-knee, Spur-winged and African Wattled Plovers, Malachite and Pied kingfishers, Swamp flycatchers and Yellow backed Weavers are all common and conspicuous. A numbers of migrants hit the highest point in February and March and are nothing short of incredible with hundreds of thousands of White-winged Terns hovering over the water, millions of common sand Martins and Yellow -wagtails roosting in reed-beds and lesser numbers of palaeartic waders like the Ringed Plover, Little Stint, Curlew Sandpipers, Common Snipe, Black-tailed Godwit, Marsh, common and Wood sandpipers, Spotted Redshank and widespread Greenshank feed along the swampy outer edges.

A number of uncommon species have been recorded from the hippo wallows along the channel including Eurasian Wigeon, Common Teal, Northern Pochard, Mongolian Plover and Jack Snipe. Hundreds of African Skimmers may well be seen roosting on sandbars near the way in to Lake Edward but are migrants from southern tropics and regularly at hand only from December to May. The Kazinga channel may also be viewed from the Katungururu Bridge on the Mbarara-Kasese main road where Pelicans, Terns, Greater Swamp and winged Warblers, Winding and Carruther’s Cisticolas and Papyrus Gonolek may be noticed.

THE ISASHA SECTOR
The Ishasha sector is a part of Queen Elizabeth National Park and boasts of many herbivorous animals. The Ishasha sector is a home to tree-climbing lions that are at times spotted resting in the branches of the huge fig trees in the area. Even though tree lions are not easy to spot, the guides of Queen Elizabeth National Park record sightings on a daily basis, they therefore have a good plan about their whereabouts in the park. The fig trees which the lions climb, stretch out along the roads in the Ishasha sector, offering to you an opportunity of noticing the lions close to the vehicle, giving you a clear platform for taking pictures.

Around the Ishasha Sector, there are accommodation facilities that include; the Wilderness Camp is an special tented camp that offers superior lodging in the natural isolated southern sector of Queen Elizabeth Park, the Ishasha Wilderness Camp is another excellent part for exceptional game viewing opportunities, with a wide variety of buffalo, elephants, kobs, topi and many more.

MARAMAGAMBO FOREST
Maramagambo Forest is among the biggest forests in Uganda with medium altitude humidity. The distinctiveness of such forest is more and more becoming uncommon in Africa. It has very fantastic lakes and craters. It is the single place in the park where one could find Blue Lakes. Other outstanding attractions in the forest consist of; primates like L’host monkeys, Chimpanzees, bush baby, baboons, vervet monkeys, red-tailed monkeys and many more. Owing to its location, Maragambo has a high variety of butterflies. The bat and the hunters cave are the other enjoyable experiences that the forest has and not forgetting the many bird species.

THE NORTHERN CRATER AREA
This place has a scenic area of explosion craters, some containing salt lakes, formed by volcanic activity some thousand years ago. Some of these craters are dry. These characteristic stunning vantage points are waterless during the dry season.

ACCESS TO QUEEN ELIZABETH NATIONAL PARK
The journey to Queen Elizabeth National Park is something like 5 to 6 hours drive from Kampala going through Mpigi, Masaka, Lyantonde, Mbarara, Bushenyi and is also easy to get to from Bwindi Impenetrable Forest. The park is easily reached by road or air transport. The Main Camp and Park Headquarters at Mweya is a well-located base for exploring the places in the northern part of the park, at the same time as the road network running from Ishasha Camp and Ranger Post, 80 kms to the south, gives a right of way into the Ishasha Sector.

ACCOMMODATION
1. Mweya Safari Lodge – the 5-star luxury lodge is perfect for relaxation, it has swimming facilities and different bird species can be seen around the area.
2. Jacana Safari Lodge – it is a luxury lodge on the banks of a crater lake and very superb for relaxation and refreshment for paramount relieve.
3. Simba Safari Camp – this safari accommodation is on the hill on the border of the national park giving extraordinary views of Lake George, the Kazinga Channel and the savannah plains.
4. The Institute of Ecology – it is a basic hostel accommodation style.
5. Mweya Hostel – it is a budget accommodation one can use.
6. Camping – this can be done at Mweya, Maramagambo Forest and Ishasha sector. It is wise to take a trip along with camping facilities. 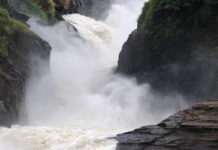 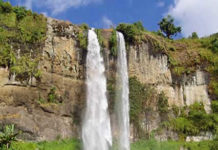