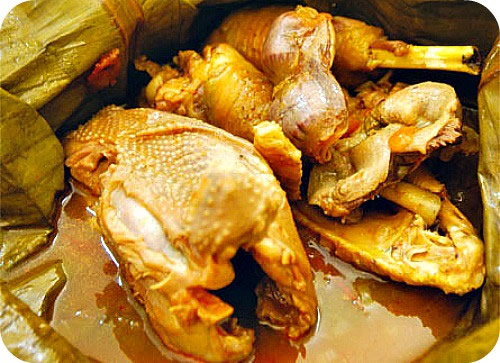 While reflecting on what makes Uganda the pearl of Africa, cuisine is one of the things that make Uganda an exceptional country. Uganda foods comprise of traditional and local foods to international foods served in all hotels, restaurants and local homes. Each tribe has its staple food whereas all tribes share specific kinds of foods in that all people from all over the country enjoy the same kind of food. Uganda cuisine entails:

This is a traditional food in Buganda kingdom. Luwombo is encompassed of either stewed chicken, mushroom, beef, groundnuts, fish or any other sauce which is tied-up in a banana leaf and steamed over Matoke and any other any other staple in banana leaves or steamer. The food is mainly served on traditional parties such as kwanjura (introduction) and Kuhingira (give away) in Buganda culture. The food was originally prepared in 1887 by kabaka Mwanga’s personal chef and has been prepared since then up to present. It is a very honored and respected food in Buganda.

It is usually made from maize but also other starches, regional names include kwon. Here the experts make posho from cornmeal, and grits. This is prepared in eastern, western and southwestern Uganda. In Eastern Uganda, cassava flour is mixed with which makes it softer and enjoyable. Posho is well known as ugali in Kenya and can be eaten with any all types of sauce.

Made from bamboo shoot, malewa is the traditional food in Eastern Uganda especially for the Bagishu and Basoga. Malewa is boiled in water to remove dirt. From there, the joints of the shoot are cut off leaving the middle parts, which are cut, into smaller pieces. After that, rock salt is added and then peanut paste added for the sauce to acquire some taste. Malewa can be served with rice, posho, sweet potatoes, cassava and Matooke. It is mostly served in ceremonies all over Busoga and Bugishu regions.

This is a staple food in the Ankole region. Matooke is collected green, peeled and then cooked and often mashed or pounded into a meal. It can be prepared for breakfast mixed with beef beans, peanut, which make it more tasty. The smashed Matooke can be served with all sauces, chicken beef, fish, groundnuts, beans and peas, which make the meal really delicious.


A staple for in northern Uganda where roasted sesame paste is mixed with a stew of beans, or greens and served as a side dish. Sim-sim is so delicious rich in calories a make up of 23% carbohydrates, 5%water, 50%fat, 12%dietry fiber and 18% of proteins.
Other foods involve sweet and Irish potatoes, cassava, millet all of which can be eaten with all kinds of sauce such as chicken, beef, G.nuts and beans among others.

These involve both local and international served on different occasions. These include porridge made from sorghum, maize and millet which is left to cool ad then taken after, coffee, black tea and milk served as breakfast. Tea can either be spiced or served in English style.
Sodas and beers are also served in all bars and restaurants. These include Fanta, Coca-Cola, Mirinda, Pepsi and krest among others depending on which one a person prefers. Also, most if not all people also take clean boiled and treated water.

Uganda is rich in fruits of diverse kinds which include oranges, mangoes, ovacados, apples, tomatoes, pineapples, pawpaw’s, jackfruit, ginger, bananas, watermelons, passion fruits, lemons and citrus fruits among others. These fruits are served as dissert along side food or in free time while relaxing and chilling.

Alongside the many foods and drinks, most appealing snacks are served all over Uganda. These are eaten along journeys, and in free times including roasted groundnuts, chapats, samosas, popcorns, and fried simsimu, among others.
Concerning vegetables, Uganda serves delicious vegetable types such as cabbages, dodo, Nakati and spinach. These are served alongside the main dish.
Conclusively therefore, Uganda serves the very nutritious food all over the world. These range from local and traditional meeting the expectations of local and international people.