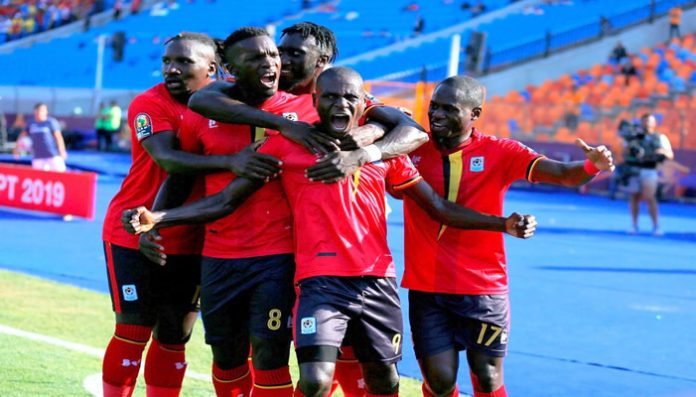 The national team The Uganda Cranes are on the verge of securing a famous and historic qualification to the round of 16 in the Africa Cup of Nations.

The Cranes are now second in Group A with 4 points behind leaders Egypt who have 6 points. Zimbabwe is third with 1 point while DR Congo are on the bottom of the group without a single point.

Uganda Cranes reached this milestone after securing a 1-all draw with Zimbabwe on Wednesday to increase their chances of qualifying through the group.

Qualifications to the last 16 looks all but sealed for the Cranes who only need a single point in their last match to secure their place in the last 16 regardless of the outcome from the other fixture in the group.

Zimbabwe have still got some thin chance of qualification in the second place if they can manage to beat DR Congo and ensure that Uganda loses to Egypt. The format of qualification to the round of 16 also increases the chances for Uganda Cranes. In case they fail to get the second position in the group, Uganda can still qualify as part of the four teams with the best performance.

The third-placed four best performing teams from four different groups will join the 12 teams that will qualify as first and second from each of the six groups to make the round of 16.

Having already bagged four points and a 2-goal difference, the Cranes look set to seize any of the above opportunities to make it to the round of 16.

The cranes kicked off their campaign on Saturday with 2-0 comfortable win over their neighbors DR Congo. Strikers Emmanuel Okwi and Patrick Kaddu scored the goals to hand the Cranes their much-needed win. Okwi was also on the score sheet on Wednesday against Zimbabwe to take his tally to two goals in the campaign.

Uganda endured a difficult afternoon with Zimbabwe missing a couple of clear chances and the story would have been different if they had taken one of them.

Uganda Cranes coach Sebastien Desabre attributed his team’s struggle against Zimbabwe to the fatigue from the win against DR Congo.

“I think that we lacked energy in the first half, due to our efforts to beat DR Congo,” explained Desabre.

“Zimbabwe had a day more rest, this plays a part in a competition like this, even if we ended the game strongly. I think using a lot of effort against the DRC and having a day less to rest explains it,” he added.

The Frenchman also lamented the absence of defender Murshid Juuko who missed the match due to injury precaution.

“It is true we missed Juuko, he missed the match today because he has a little pain in the hamstring and so I decided to keep him on the bench today.  When he plays may be my team is better, we missed him today when we were under pressure, we have other players and we need to be fit to play a match at this level and, with his pain, it was difficult.” Desabre explained.

Uganda will face hosts Egypt in the final game of the group on 30 June while Zimbabwe will take on DR Congo in the other fixture of the group.

Uganda’s neighbors Kenya and Tanzania will lock horns tonight in the East African Derby of Group C as the two teams look to secure their first points after both losing their opening games.

Kenya lost 2-0 to Senegal while Tanzania lost to Algeria by the same margin in their opening matches. Algeria will take on Senegal as two African giants face off in the other fixture of Group C.