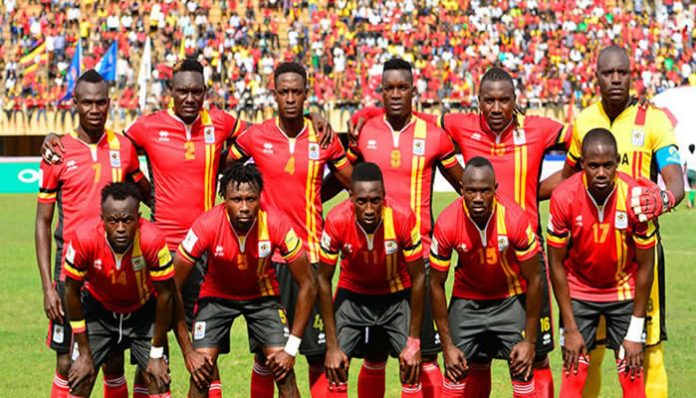 The Total 2019 Africa Cup of Nations kicked off last night with the hosts Egypt who are in the same group with Uganda Cranes beating Zimbabwe 1-0 in the opening match of the tournament.

The second match of the tournament and in group A as well sees the Cranes go head to head with their neighbors Democratic Republic of Congo (DRC) today. The match will kickoff at 5:30pm local time.

The Cranes will be delighted to beat their neighbors as it will lighten up their chances of qualifying to the last 16 for the first time in over 40 years.

This s the second consecutive time Uganda Cranes are participating in the Africa Cup of Nations after featuring at the competition in Gabon in 2017 though they were eliminated at group stages.

After today’s match against DR Congo, the Cranes will then face Zimbabwe on 26 June before concluding their group stage matches against Egypt on 30 June.

Courage from the coach

While speaking in the press conference, Uganda Cranes coach Sebastien Desabre said that they want to win their opening match to increase their chances of going far in the competition.

The Frenchman says he doesn’t count on his experience with some of the players in the Egyptian side.

“Of course people think I have an advantage, having trained some of the players on the Egypt team, but I will not have much hope on that, it all has to be on the pitch.

“The most vital game for us is the game with Congo. Our first game can determine our fate. We must win the Congo game so that we play the rest with less pressure.

“Our ambitions are so high. And to win you have to take some risks. I have told my boys to play with confidence and take some risks while attacking. To win you must score which comes with taking risks.” Said the Frenchman.

Desabre says that he is aiming at helping The Cranes register a better performance and leave a mark in this year’s competition.

“My ambition is to write a good memory with my team. We did very good things during the camp and the motivation is really high.

“We expect good results from here but the main objective is on improving the previous result Uganda had in the Afcon, then we can aim higher after that.” He said.

The motivation in The Cranes’ camp is really high after registering positive results in their two pre-tournament friendlies where they had a goalless draw against Turkmenistan before registering a famous 1-0 win against 2015 Afcon champions Ivory Coast.

Encouragement from the President

President Yoweri Museveni has also sent an encouraging message to the cranes calling upon them to replicate their qualification form in the tournament.

This is what the president wrote to the team;

“All the best, Uganda Cranes. On Friday, the African Cup of Nations (AFCON) will officially kick off in Egypt. The Uganda Cranes who are in Group A, will play their first game against DR Congo on Saturday. I want to wish them the best of luck in this tournament.

You posted very good results during the qualification, where you topped Group L with 13 points. Our prayer and hope is that this good form continues in this tournament so that you emerge victorious and make Uganda proud. I thank the FUFA, team officials, the coach and all Ugandans for rallying behind the team. I wish you success and make sure you bring the trophy home. God bless you.” Said the President.

Here is the Uganda Cranes’ final 23-man squad for Afcon 2019 as named by coach Sebastien Desabre;