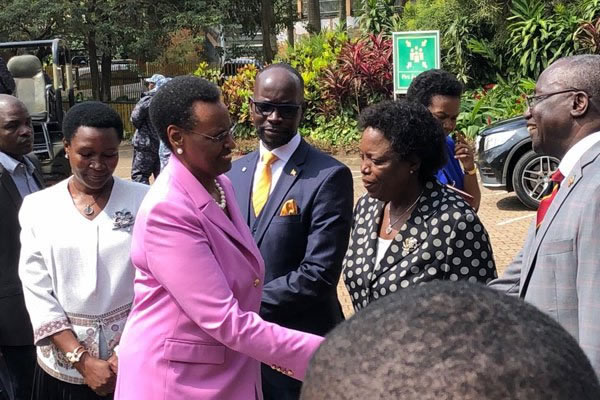 The Uganda National Examination Board (UNEB) has released the results of last year’s Primary Leaving Examinations. The results indicate an improved general performance compared to the previous year (2018) while in terms of gender, male candidates performed better than their female counterparts.

English and Social Studies were the best done subjects while candidates struggled in Mathematics and Science. As usual, cases of exam malpractice were reported and UNEB is still withholding results of 1,512 candidates as investigations are carried out.

UNEB Executive Secretary Dan Odongo said that schools whose results are withheld will be notified through their district inspectors of schools.

The PLE results of 2019 were read by the First Lady and Minister of education Janet Museveni at Kampala Parents School on Friday. The Minister was presented the results in a thick booklet by UNEB Chairperson Mary Okwakol.

Ms. Okwakol said that literacy has generally improved among the pupils as reported by the examiners and added that more learners will continue to join post-primary institutions and clarified that no exam papers leaked to candidates before last year’s exams.

“The correct position is that no papers leaked. The papers which were circulated were fake, I appeal to the media to always report correctly.” She said.

The Minister said that she was pleased with the increased literacy levels in the country but criticized the practice of charging parents pre-registration exam fees by schools which said is unfair and must stop.

“This practice of giving pre-registration examinations must stop. All children who go to school must have the opportunity to sit for the final exams. Media, you can help us in this area to inform the public that this practice must stop.” She said.

Meanwhile, the Minister also sounded a serious warning to those who engage in exam malpractice and called upon all stakeholders to step and stop it. Examiners revealed that during the course of marking exams they found disturbing expressions inside some scripts written by candidates such as; ‘This is not the paper we are to do’ and ‘This is not our examination.’

Such scripts were likely from candidates who had received fake exam papers before the final day of the exam. Mr Odongo said that many “gullible” schools engaged in buying these papers and used them to teach candidates overnight on the eve of the examination. He said that the culprits are waiting court action.

So far, 61 suspects have been arrested and charged with cases relating to exam malpractice and the major ones include external assistance given to candidates by third parties inside examination rooms.

Mrs. Museveni called upon the media to join hands with other stakeholders to fight the vice of exam malpractice and underlined that the “corrupt and fraudulent actions” of teachers involved might have caused the affected candidates to fail, adding that it is a sign of “serious inadequacies in teaching”.

“UNEB wishes to warn that from now on, the perpetrators of examination malpractice will be hunted down and brought to book,” warned Odongo. The body says that their examination security will accord a fair hearing to all the candidates whose exams are withheld and those who will be cleared will have their results released.

“After the hearings are concluded, the board will publish in the media the list of schools and districts from which results will have been cancelled.” Said Odongo.

The number of candidates sitting for PLE has been increasing by an average of 2.4% over the last five years according to Mr. Odongo. Another significant trend is that more girls than boys have been registered for PLE in the same period with last year figure indicating that 359,764 (51.7%) girls compared to 336,040 (48.3%) boys.

“In both English and Mathematics, performance was poor in questions where candidates were required to apply knowledge in problem solving situations or express themselves freely. Candidates were more comfortable with questions that are direct and based on recall. This situation has persisted over the years.” Said Odongo.

On the positive side, candidates registered an improvement in their handwriting and presentation of work. There was a big reduction in the number of candidates scoring no mark at all compared to previous years.

Generally, last year’s candidates performed better than their counterparts of 2018 in divisions 1,2 and 3. A total of 617,150 candidates have qualified to join post-primary institutions compared to 599,593 in 2018.