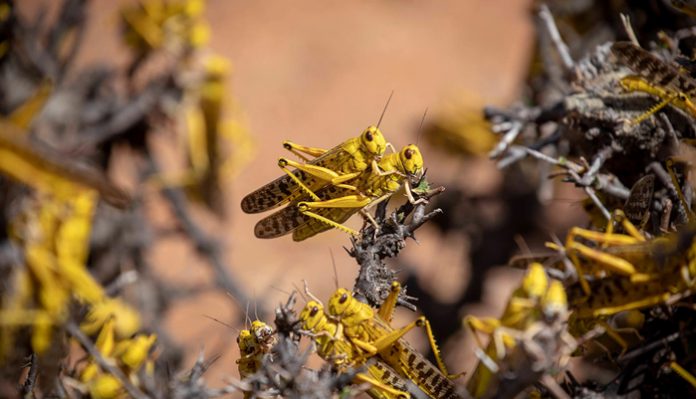 Since the end of last year, locusts have invaded East Africa and the invasion has been considered the biggest in 25 and 70 years in Ethiopia and Kenya respectively.

According to environment experts, the billions of locusts that are swarming though the region are a result of the recent extreme weather swings and could turn catastrophic if the pace and the numbers at which they are approaching are not retarded.

Since November last year, dense clouds of locusts have been seen spreading from Ethiopia and Somalia and now into Kenya in what is regarded now as the region’s worst infestation in decades.

According to the UN’s Food and Agriculture Organization (FAO), one swam in Kenya was estimated at around 2,400 square kilometers (930 square miles) that could contain up to 200 billion locusts with each destroying its own weight in food every day in consumption.

According to FAO, this locusts’ invasion is the biggest in Ethiopia and Somalia in 25 years while it’s the biggest in Kenya in 70 years. The organization warns that if unchecked, locusts numbers could increase 500 times by the middle of this year spreading to neighboring countries like Uganda and South Sudan becoming a plague that will destroy both crops and pasture causing catastrophic problems in the already vulnerable region.

Guleid Artan, an expert from the Climate Prediction and Applications Center (ICPAC) warns that this could lead “a major food security problem”, as he spoke to the press in Nairobi. He said that the locusts were the latest symptom of extreme climate conditions that saw 2019 start with a drought and end with one of the wettest seasons in four decades in some parts where floods killed hundreds of people across the region.

According to FAO, the current invasion is known as an “upsurge” and when the entire region gets affected and the disaster gets worse and cannot be contained for over a year or more, it would turn into a “plague” of locusts.

Mr Artan said the invasion had come after a year of extremes which say the East Africa coast hit by eight cyclones, the highest in a single calendar year since 1976. This was due to a warmer Western Indian Ocean, a climate condition known as the Indian Ocean Dipole which has conversely led to severe drought in Australia that is experiencing its own extremes: bushfires, hail and dust storms.

“We know East Africa is one of the most vulnerable to climate change. We know this region will see more extremes,” warned Artan.

In Kenya, since the massive swarms entered in December, they have torn through pastureland in the north and central of the country. farmers in these regions were a bit lucky that their crops had already matured or been harvested by the time of the locust invasion, however, herders paid the bigger cost as vegetation for their animals is consumed by the destructive aliens. Unfortunately, pastoralists were just emerging from three years of drought and the recovery from such a long dry spell usually takes them up to five years.

Experts further warn that if locusts are not brought under control by the start of the next planting and rainy season, around March, farmers could see their crops decimated.