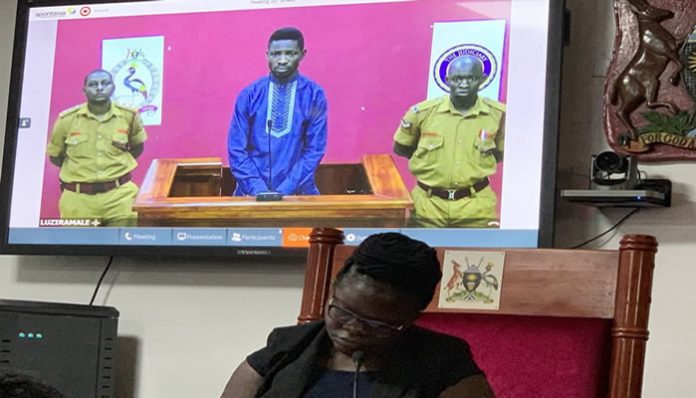 Mr. Kyagulanyi was ordered to pay a cash bail of Shs1 million as one of the bail conditions. Buganda Road Court One Magistrate, Ms. Esther Nahirya was in charge of the case. Following the bail, court fixed May 23rd as the hearing date of Kyagulanyi’s case.

Unlike the previous cases where Kyagulanyi had appearing in court for hearing, Thursday’s case was conducted under video conferencing. Bobi Wine was placed in the virtue court at Luzira that was connected to the Buganda Road Court via video conferencing. Proceedings were followed on the large flat screens installed in court.

The technology of using video conferencing in courts was launched last week to allow suspects attend court proceedings while in prison.

A number of people including several members of parliament had assembled in the court at Buganda Road early this morning waiting for the case to kickoff.

Bobi Wine was arrested on Monday as he was heading to Kibuli police where he had been summoned for interrogation. Although the initial cause of Monday’s interrogation was believed to be concerning the MP’s clash with police on Easter Monday, he was rather charged with offenses he committed in July 2018.

After his arrest on Monday, Bobi Wine was sent to Luzira prison until today (Thursday)

According to prosecution, Bobi Wine together with several others still at large including his brother Mr. Fred Nyanzi Ssentamu held an illegal protest contrary to section 116 of the Penal Code Act. The said protests were organized to challenge the Mobile Money and Social media taxes that had been introduced by the government.

Earlier on Thursday, security was heightened in Kampala as the MP was expected to be brought from Luzira to Buganda Road Magistrate Court to face charges.