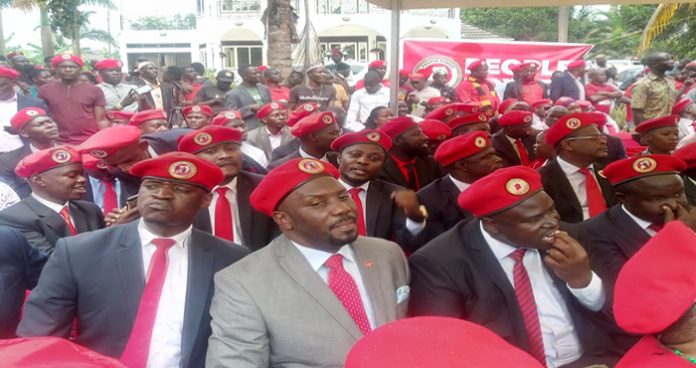 The team will be in charge of mobilizing supporters and coordinating all the necessary activities in different regions ahead of the 2021 general elections.

The appointed committee will also be responsible for identifying, recruiting and harmonizing candidates from these regions vying for several political posts in the upcoming elections.

The meeting in which the coordination committee was appointed took place at Bobi Wine’s home in Magere, Wakiso district on Wednesday.

The People Power Spokesperson, Joel Ssenyonyi said that they had intended to have this meeting in a hotel but they failed to secure a place sine all the hotels contacted turned them down due to fear of government’s response for hosting Bobi Wine.

“We were not supposed to be here today for this press conference. We should have been at one of the hotels but we roamed town for the last couple of days seeking to get space but all of them declined, especially when they got to know its People Power”, he said.

The committee comprises of members from different political parties as well as those from diaspora. Mr. Ssenyonyi said that all members are there for a better country.

“We have leaders here from the NRM and some are in Parliament but they are here because we all want a better country. We also have members from DP, FDC, Jeema… People Power is also about empowering women. President Museveni says that he has empowered women but in many ways, he has disempowered them. We are keen on changing that”, he said.

Arua Municipality MP Kasiano Wadri said that the involvement of members from other political parties will not affect multiparty democracy but it will rather empower all parties.

“Multiparty democracy has principles. People Power has come to empower all political parties and not to break them. We are coming up with something new because we can’t behave normally in an abnormal situation. Multipartism can’t be killed by what you see here. We are all here for a common cause. This is a consortium, we are here to foster a common goal”, he said.

The committee teams that were appointed were regional based and are responsible to coordinate activities in their respective regions.