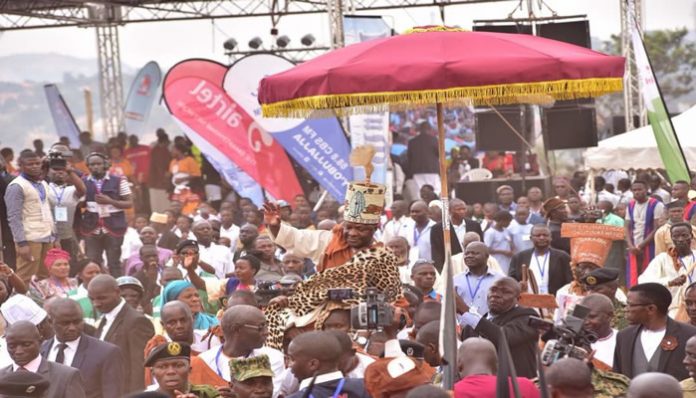 The coronation celebrations kicked off yesterday with the Kabaka visiting the headquarters of Mamba and Ffumbe clans in Busiro, one of the 18 counties that make the Buganda Kingdom which is also hosting this year’s 26th coronation anniversary.

According to the kingdom officials, this year’s coronation anniversary aims at promoting education and healthcare among the people in Buganda Kingdom. This has been evident as several healthcare programs have been arranged in different parts of the kingdom offering services like Hepatitis B testing and vaccination, HIV testing and counseling, among others.

This year’s celebrations have also been graced by the presence of the Sultan of Sokoto Caliphate in Nigeria who came with a delegation as a special guest of Kabaka Mutebi.

The Kingship of Buganda was restored in 1993 and the coronation of Kabaka Muwenda Mutebi II took place on 31st July that year at Nagalabi Buddo currently in Wakiso district. The Central government under president Museveni decided to restore the Kingship of Buganda after it had been abolished by former President Milton Obote in 1966 forcing the then king Edward Muteesa II, father of Mutebi to be exiled in England where he later died.

Over the 26 years under Kabaka Mutebi’s reign, the Kingdom of Buganda has registered several achievements including the successful restoration of administrative units at all levels of the kingdoms like counties, sub-counties, villages, and clans. The kingdom has also been able to set up several media houses like radios Television and a telecom company.

Economically the Kingdom has set up several commercial buildings including Masengere at Bulanga Mengo, the main headquarters of the kingdom, Muganzirwaza at Katwe in Kampala, among others. Several development projects have been promoted by the kingdom including cooperatives, donation of agricultural inputs like coffee to farmers as well as promoting saving groups among the youth.

On the tradition and cultural note, the Kingdom has successfully restored the Kasubi tombs (the burial ground for the kings of Buganda) that had been completely burnt down but now they stand in a more modern version. This has not only helped to uphold the culture and the history of Buganda but also promoted tourism that fetches revenue for the kingdom.

In addition to setting up supportive measures, Kabaka Mutebi is always heard in his several speeches calling upon the youth and the young people in Buganda to ensure they attain education as well as living healthy lives. His effort to fight against HIV among the youth saw him being recognized by the Joint United Nations Program on HIV/Aids (Unaids) in 2017 who appointed him as its goodwill ambassador in the fight against the epidemic.

While speaking during his visit to the Ffumbe clan headquarters at Bakka, Busiro county yesterday, Kabaka Mutebi called upon clan heads to be visionary leaders in order to restore the heritage and culture of the kingdom.

“The task of restoring our heritage and culture that had been destroyed, developing our people at all levels, requires visionary clan leaders because they are respected people and their respective clans are seen as role model,” said Kabaka Mutebi.

Kabaka also called upon the youth to be decisive and get involved in matters of interest.

“This is an era of competition and winners must be educated and having good conduct. Be decisive because your parents have enabled you to attend school to be useful to the entire nation,” he added.