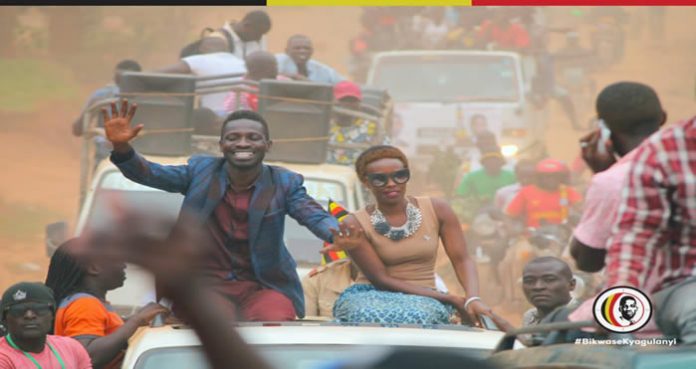 The Kyadondo East Member of Parliament Robert Kyagulanyi also known as Bobi Wine has been arrested upon his return from USA where he had gone for specialized treatment three weeks ago.

The MP was arrested by the security forces who whisked him away to an unknown location immediately after disembarking from the KQ plane.

The Police had earlier on Wednesday stated that they would pick Kyagulanyi from the Airport upon his arrival and provide him with security to his home in Magere, Wakiso district.

Earlier on the Aviation police was sighted driving along the Airport’s tarmac with a white Prado with tinted windows in what was assumed to be a plot to whisk Bobi Wine away before he reaches the terminal building.

There has been heavy deployment of security Forces along the Kampala-Entebbe Highway sine the early hours of Thursday in preparation for Bobi Wine’s the return.

Along the Highway, several people were being arrested, caned and thrown onto police vehicles. Others who were trying to observe the situation from their the top of buildings at several towns like Abayita Ababiri were also forced to go back into shops.

At the time of this news release, Bobi Wine has been reported to have arrived safely at his place in Magere amid huge jubilation and he is waiting to address his supporters.