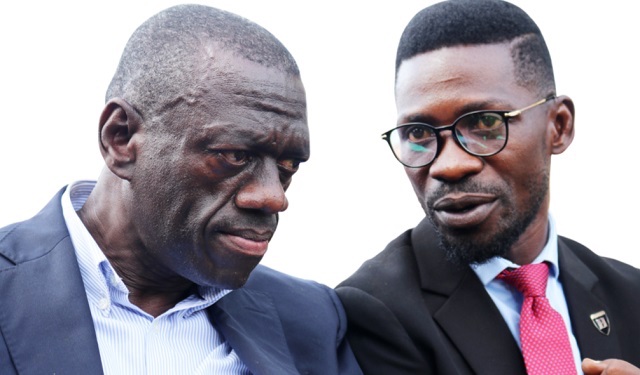 One of the key issues discussed by the two leaders is the coming together of opposition political parties to form an alliance in the forth-coming elections with the major aim of defeating President Museveni. Mr. Museveni has already been declared by his party, National Resistance Movement (NRM) as their flag bearer in the 2021 presidential elections. On the other hand, Bobi Wine has also already declared publicly that he will challenge President Museveni for presidency in the same elections.

The duo have been hailed for coming together to create this alliance as many see it as the only way they can mobilize enough support that can help them to defeat Mr. Museveni. According to Mr. Kyagulanyi, they decided to work together as the leading opposition figures in order to show their supporters that they are one with the same goal which should encourage them to also unite. There have been a few differences among the supporters of both camps with some claiming that Dr Besigye has failed to defeat Museveni on four occasions and therefore should step aside and leave Bobi Wine to contest this time. However, those supporting Dr. Besigye claim that he is the main opposition figure who poses the biggest threat to Mr. Museveni and therefore he should be allowed to challenge him again. It is this kind of division among opposition supporters that propelled both Bobi Wine and Besigye to come together to show the supporters that they are one according Mr. Kyagulanyi.

Despite the coming together of the two main opposition politicians, there are still many especially from the ruling party (NRM) who are downplaying the impact this alliance may create. Most of these claim that it is not the first time that opposition politicians are coming together to defeat Mr. but all the previous alliances have been fruitless. They point out to the previous presidential elections in 2011 and 2016 when the opposition tried to unite but failed to agree on a single candidate who could stand against Mr. Museveni

Given that previous unpleasing history associated with opposition alliances, it is a clear indicator that both Bobi Wine and Besigye have a lot of work to in order to succeed where they have been failing before.

Some of the major issues the opposition has to address before the general elections include the following;

Although Bobi Wine and Besigye are the two leading opposition figures who are coming together, there are still many other prominent leaders in the opposition who are yet to agree to the cause. This has been the biggest challenge for the opposition and the cause of the failure to come up with one candidate in the previous presidential elections.

It is commonly said that the main support for the opposition in Uganda is much concentrated in the central region especially in the capital Kampala and its surrounding areas. This has been evident in the previous elections where the opposition sweeps almost all the elective positions in the central but lose miserably in upcountry including in at presidential level. In response to this challenge, recently appointed a team of regional mobilizers to help popularize the People Power movement in different parts of the country.

For so long the opposition in Uganda has complained about irregularities in the general elections including rigging the presidential results. Such cases have been reported to courts of law but unfortunately the opposition has been successful to get a ruling that overturns the results. Enforcing free and fair elections is one of the biggest tasks the opposition is facing and they have to get a way of doing it if they are to consider becoming victorious.

One of the major long-term challenges the opposition in Uganda has faced is lack of numbers in parliament. This has been so detrimental to the opposition that they hardly get any bill passed in their favor. On the other hand, the ruling party has used their majority number in parliament to get a lot of bills passed in their favor including the removal of presidential terms and presidential age limit in 2005 and 2017 respectively in order to make way for President Museveni to continue standing for elections.