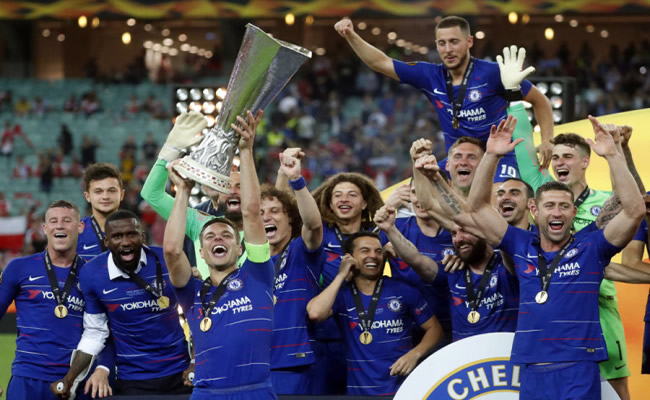 Eden Hazard scored a brace while Olivier Giroud and Pedro Rodriguez scored one each that saw Chelsea defeat their London rivals Arsenal 4-1 in the Europa League final.

After a balanced first-half display from both teams saw the first half end goalless, a disastrous second half saw Arsenal concede four goals in the space of 23 minutes after the break.

Eden Hazard registered his name on the score sheet when he converted a penalty after a foul was committed on Giroud by Ainsley Maitland Niles in the area. Hazard completed his brace in the 72nd minute with a sublime finish after Chelsea got their opponents on break to put the game beyond reach for Arsenal.

Alex Iwobi had restored some hope for an arsenal comeback with a fine long-range strike in the 69th minute but it just proved to be a consolation in the end.

What does defeat mean for Arsenal?

Chelsea’s triumph saw them finish Maurizio Sarri’s first season at the bridge with silverware and now they will turn their attention to the futures of Hazard and Sarri who are reportedly wanted by Real Madrid and Juventus respectively.

Most of the talk on the eve of the game was about UEFA’s decision to choose Baku as the venue for the final and the travel difficulties for the fans of both clubs.

After a goalless and drab first half, the atmosphere in the stadium that was far from full remained tense in the fans of both clubs.

The best chance in the start fell on Arsenal’s Pierre Emerick Aubameyang who shot wide from inside the box after Chelsea’s goalkeeper Kepa Arrizabalaga failed to deal with the ball at the near post.

Arsenal saw their penalty appeal brushed off by Video Assistant Referee after Alexandre Lacazatte was taken down by Arrizabalaga as he took the ball past him.

Arsenal came close to scoring again when Granit had his powerful effort from 20 yards clipped top of the bar as Chelsea were still struggling to build momentum.

Chelsea started improving in the latter stages of the first half when Emerson Palmieri forced a save from Cech in the 34th minute before Cech excellently made a one-handed save to deny Olivier Giroud the opener.

After the break, Giroud broke the deadlock when he expertly headed Emerson’s cross into the net to take his Europa League goal tally making him the competition’s top scorer this season.

After Giroud’s opener, Chelsea took control of the game and scored two-quick succession goals to give them and advantage.

Pedro converted Hazard’s cross into the net scored in the 60th minute before the Belgian converted a penalty after Niles barged Giroud in the back in the box.

Alex Iwobi who came in as a substitute for Lucas Torreira pulled a goal back with a powerful strike from outside the box in the 69th minute before Giroud made an assist to help Hazzard score his second for the night.

The closing stages of the game saw Cech make saves from Hazzard and substitute Willian and Lacazette was denied by Arrizabalaga the other end before Joe Willock who came in for Ozil curled wide from the box and that seemed to be final chance of any arsenal unlikely comeback.

What next for Arsenal?

Having seen their only chance of qualifying for next season’s Champions League blown away in a humiliating fashion, Arsenal will be heading into the break with a lot of questions on their mind as the transfer window opens.

Unai Emery’s first season at the Emirates has been a mixture of good and bad results and the gunners will regret not seizing the chance they had to finish in the top four at home after winning only once in their last five Premier League games.

Arsenal’s major problems this season have been in defence after conceding more than 50 goals in Premier League and their weakness at the back was evident last night when they failed to deal with Chelsea’s attacking threat. Strengthening the backline looks to be the priority of Unai Emery’s plans while an overhaul of the squad also looks likely with the north London club looking set to offload a number of players. Petr Cech, Aaron Ramsey, and Danny Welbeck have already left the club and they are likely to be followed by many others with among those frequently mentioned including Ozil, Mustafi, Mkhitaryan, Elneny, Monr