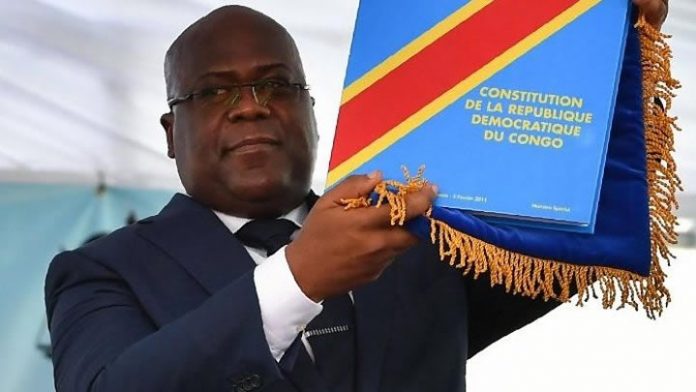 Democratic Republic of Congo’s opposition leader Felix Tshisekedi has been sworn in as the country’s new president succeeding Joseph Kabila.

The new president takes over power in DR Congo’s first ever peaceful transfer of power in almost 60 years since the country gained independence from Belgium in 1960.

The swearing in took place in the capital Kinshasa on Thursday and it was attended by Kenyan president Uhuru Kenyatta who was the only outside head of state present out of the 17 who were invited.

Tshisekedi has been finally sworn after a bitterly disputed election that saw fellow opposition leader Martin Fayulu challenge his victory in the court after rejecting the results in which Tshisekedi was declared winner by the electoral commission.

After the elections, several sources including the country’s influential Catholic Church came out to declare that Fayulu had a landslide victory in the elections but he was denied by the backroom deal between Tshisekedi and former president Joseph Kabila.

There were several calls for a recount of the votes made by Fayulu and other parties including the regional blocs SADC and the African Union but they were all ignored by the electoral commission that decided to uphold the status quo.

During his inauguration speech, Tshisekedi collapsed on the podium after feeling faint but he shortly returned to continue and he stressed that he was exhausted from the long presidential campaign and the emotion of the day.

While addressing the excited and jubilant crowd, Tshisekedi said “We want to build a strong Congo, turned toward development in peace and security, a Congo for all in which everyone has a place”.

The first peaceful hand over of power is deemed by many as a sign that DR Congo is becoming more democratic though others are still critical of the conditions under which the transition is conducted.

Former president Joseph Kabila called upon all Congolese to rally behind Tshisekedi and support him and assured his successor that he could call on him for advice at any time.

As he comes into presidency, Mr. Felix Tshisekedi is mostly known as a son of the late veteran opposition leader Etienne Tshisekedi who is remembered for his long term fight for democracy in DR Congo until he passed on in 2016.

Etienne Tshisekedi was the founder of the Union for Democracy and Social Progress (UDPS) in 1982, a party Felix Tshisekedi leads currently.

Felix Tshisekedi comes into power amidst speculations that the outgoing president Joseph Kabila remains a big stronghold in this new government and he may continue to exert control indirectly.

The new president’s party, UDPS, is also poorly represented in parliament something that is likely to give him hard time to implement his views and policies. Likewise, in the army and the police there are senior echelons who were appointed by the old regime and any attempt to remove them would be seen as a sign of the new government trying to become independent.