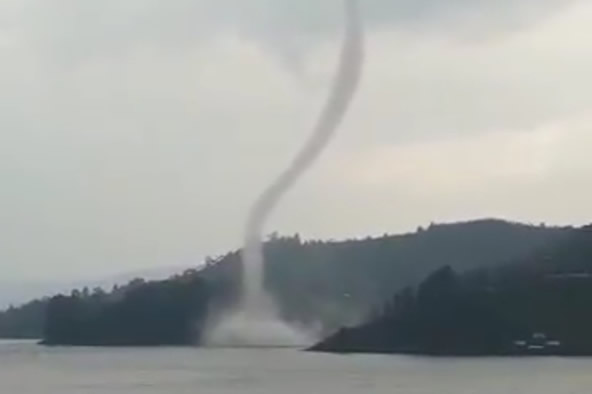 Waterspout hit Lake Bunyonyi Uganda
Residents of Kabale and Rubanda districts were yesterday 20th January 2019 frightened by the waterspout that hit lake Bunyonyi. The incident happened a few minutes after a heavy down pour that rained at 4:00pm. Waterspout is a rare occurrence, which happen once in very many years. For instance, its believed that the last waterspout happened over 20 years back meaning that it was a new experience for all people aged 25 years and below in kabale district. The incident was scaring but at the same time exciting especially to those who had never seen it. Lots of videos for the funnel-like shaped whirlwind that molded a vorte from the thick cloud over the lake close to Harutinda landing site.Due to fear, some people were seen trying to relocate from near the scene to further areas while those with motorcycles and cars drove to kabale town for safety. Waterspout is locally known as “eshata” in rukiga which natives believe can be chased by screaming loud. For that case, local people in the nearby areas were heard and seen shouting loud to scare it away and avert the dangers likely to come with it.

Was it a tornado or waterspout?


Much as some people were calling it a tornado, the incident that happened at lake Bunyonyi was a waterspout. A waterspout is a category of tornado, a whirling column of air and water mist which form when cumulus clouds grow rapidly rising hundreds of feet into the air. It is normally weaker and do not suck up water. Regarding tornado, it mostly occurs on land and is much stronger that it destroys the whole area damaging properties and gardens leading to death of people and animals. Waterspouts differ depending on their formation some connected to cumulus congestus cloud, others to cumuliform cloud and others to cumulonimbus cloud. A waterspout is therefore a non-super cell tornado over water. Waterspouts Eyewitnesses reported that the visible white colored funnel from the water surface to the overhead cloud appeared at about 6pm lasting for over 30 minutes.

What happened before?
The whole afternoon of 20th Jan 2019 was rainy for that people of Kabale and Rubanda districts which share borders of lake Bunynonyi. Rain started at around 4pm accompanied by lightening’s and thunderstorm. It poured for roughly 2 hours stopping at 6pm. This was followed by a waterspout when the cloud contacted the water surface; a circular light-colored disk appeared with spiraling movements for close to 2 minutes, which called for an alarm from locals. The cloud then reduced slowly in thickness before disconnecting from the water surface.

About lake Bunyoyi
Leaving alone the waterspout, lake Bunyonyi is one of the must visit travel destinations in southwestern Uganda. Lake Bunyonyi is known as a home for “little birds” which reside on the shores and swamps around the lake. The lake was formed as a result of laves flow that emerged from the eruptions of the Virunga volcanoes and is the second deepest lake in Africa after Lake Tanganyika. Lake Bunyonyi comprise of 29 islands each with a unique history and interesting facts. The islands on lake Bunyonyi include Bushara Island, Akampene Island, Kyahugye island, Njuyeera island, Bucuranuka island, and Bwama island among others. Some of these islands are occupied b local people and others used for agriculture.

What to see and do on lake Bunyonyi
Travelers to lake bunyonyi have a variety of unique attractions to see and tourism activities to take part in. These include swimming, community visit, canoeing to islands, bird watching, batwa pygmy visits, bamboo walk and chilling among others. Experienced local guides who have been born and raised in lake Bunyonyi help you explore the community and tell you detailed facts about this wonderful lake. Most people on Uganda safaris visit Lake Bunyonyi as a complement to gorilla watching trips in Bwindi forest national park a home to half of the world’s mountain gorillas. For more Uganda safaris, contact

In conclusion, witnessing a waterspout on lake Bunyonyi was an exceptional but scaring experience for the local people. The incident will be one of the stories told to future travelers to lake Bunyonyi and kabala district as a whole.