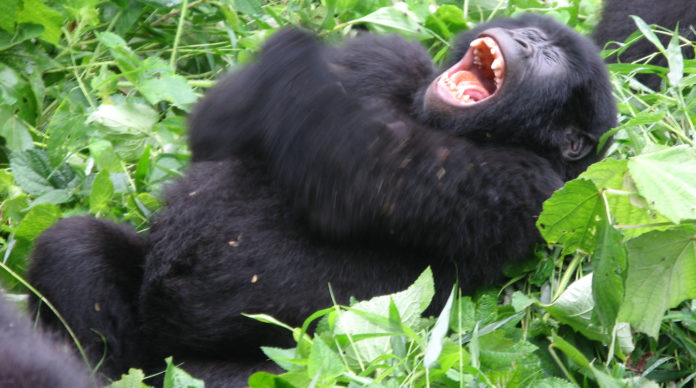 On the look, the mountain gorillas are more grey than brown, are covered with longer hair and their faces are more thickly covered in hair. Silverbacks are the mature dominant males for a family that includes a group of females with or without infants and juveniles.

Mountain gorilla silverbacks weigh over 220 kilograms and measures 190 centimeters high with large bodies that cannot allow any loss of warmth from the skin. They also keep moving throughout daylight as they feed on vegetarian diet.

Western lowland gorillas are less important and lighter compared to others. Males weigh around 180kgs and 170cms tall whereas the females are much smaller. They are herbivorous but also reptiles and insects that pass them and can be considered as omnivorous animals.

Lowland gorillas on the other hand were the first gorillas and now live close to the swamp lands and woodlands of western Africa. Mountain gorillas are openly found around both thick and thin forests and in lowland swamps.

The last recorded population of gorillas in 2013 showed that there were only 400 gorillas in Virunga region and only 480 gorillas in Bwindi which makes a total of 880 gorillas. Today, the population may be more than 880 Mountain gorillas including the habituated groups open gorilla safaris in the different countries where .

Gorillas live in the Virunga region that covers Uganda, Rwanda and D R Congo in Africa. A greater part of the gorillas is seen in the volcanoes of Visoke, Karisimbi, Mikeno, Muhabura, Mgahinga and Sabinyo. Mountain gorillas stay in steep environment less than 13,000 feet high. Gorillas spend maximum of their time in the woodlands and bamboo plantations.

Most of gorillas in zoos are lowland gorillas. Attempts were made in 1960s and 70s so as to capture live mountain gorillas but none survived as many adult gorillas were killed while trying to obtain live babies. Lowland gorillas have been kept and even bred successfully in captivity though they end up affected by stress and disease.

Most mountain gorillas are found in Bwindi Impenetrable Forest National Park Uganda, Volcanoes National Park in Rwanda and in Virunga National Park in Democratic Republic of Congo. Less gorilla trekking activities are done in the DR Congo because to political instability issues. Most tourists trek gorillas in Uganda and in Rwanda. Usually annual weather conditions support gorilla trekking throughout the year though some days are cooler than other days. Trekkers are constantly advised to come along with Tracking gears like jackets and hiking shoes to shun irregular weather situations.

There are several online based tour operators that organize gorilla safaris to Uganda, Rwanda and DRC. Usually few numbers of people book gorilla permits in advance in order to visit gorillas. Gorilla trekking is physically exhausting and requires one to be bodily fit and impartially ready for walking on steep forested trails.

The gorillas are calm and gentle creatures and rarely react to the visitors aside silverbacks behaving in an intimidating manner. Tourists are always advised to follow strict rules from the park rangers and guides in order to minimize the risk of human disease transmission to gorillas and also avoid causing stress to the animals.

Previously poaching was a serious issue and still is a threat to mountain gorillas aside deforestation and disease spread from the neighboring communities. Gorillas have a low reproduction rate since females obtain their sexual maturity at 10 years and above. That means they produce once after four years. On the other hand, the male gorillas become sexually active at 15 years. There is also high infant mortality rate at 40%.

Strictly one is authorized to observe a distance of 7 meters from the mountain gorillas despite the fact that gorillas continually move closer to the visitors. You are advised to switch off the flash light when snapping them. Visitors are also not permitted to touch the gorillas.

One must be 15 years of age and above to be allowed to trek mountain gorillas. This applies both in Uganda or Rwanda. Usually when booking for a permit, one provides the date of birth and year to confirm their legibility to track gorillas.

A male mountain gorilla is acknowledged as a silverback when it has reached maturity. Adult male gorillas later build up a silver-colored hair on their backs and can easily be with their unique color and size.