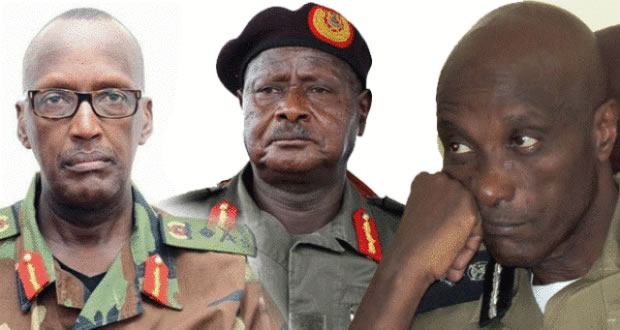 Gen Kale Kaihura & Tukukunde Fired From Office
The evening of 4th March 2018 didn’t go well with the former police boss Gen kale kayihura and Tukunde the former security minister in Uganda. With immediate effect and the power granted to him by the constitution of Uganda, HE Yoweri kaguta, the president of Uganda appointed a new inspector general of police (IGP) and the security minister to replace the 13-year serving general kale kayihura and Tumukunde from their respective offices. The firing of the two bosses come after various scenarios associated with an increase in cases of murder, rape and robberies in different parts of Uganda especially in the districts of Luwero, Mukono, Masaka, Gulu among others all over the country since late last year. the increased insecurity in most parts of Uganda has been a threat to Uganda’s tourism hindering activities such as gorilla safaris to Bwindi & Mgahinga, mountaineering, cultural tours, bird watching and game viewing safaris in the open savannah grassland national parks. Also, there have been several complaints forwarded to the president by local people on how the Uganda police have failed to fight crime offenses in the country and how some police offices collaborate with criminals.

Who are the new appointed police officers? You may be wondering who they are and what they have been doing in the last days. The former head of military police Mr Ochola Okoth

has replaced general kale kayihura while Gen Elly Tumwine a war old-timer who fired a first shot of the National Resistance Army (NRA) war replaces gen henry Tumukunde as a new security minister. Brig Sabiiti Muzeyi is a new deputy for the inspector general of police.

The parallel leadership and misunderstanding between gen kale kayihura and gen Henry Tumukunde is one of the reasons for their sucking. On several occasions, the two leaders have been seen and hear accusing one another for failure of duty, which increased crime rate in Uganda. Since the start of this year, the two generals have been reported for taking different routes concerning keeping peace and security of Uganda citizens. Instead of supporting and joining hands to fight crimes in Uganda, the two police bosses have fought and disagreed on what to do but rather accusing one another.

The two generals, kayihura the inspector general of police and Tumukunde for the internal security organization have engaged in public wrangles where kayihura accused Tumukunde for failing to fight crimes in Uganda. It’s believed that the two have been on several occasions invited and urged to work together by the president but have remained parallel. To some Ugandans, the sucking of the two leaders was the best decision by the president since the two had failed to agree on how to keep Ugandans and their properties safe.

Leaving out all other crimes related to death and robbery, the latest kidnap and killing of the innocent Susan Magara

turned to be a turning point for the Uganda police to clean up their house. Suzan’s’ death raised complaints on how the police would fail to trap the suspects who held Susan captive for three weeks while making continuous communications via mobile phone with the family of the deceased demanding for the ransom of 100musd to set her free. Its here that some people became suspicious on the negligence of the police.

Unlike kayihura whose life has been full of favor since he joined the Uganda police, Tumukunde’s life has been full of ups and down’s. After opposing the removal of term limits in 2003, Tumukunde was not o in good terms with his president (Museveni) after which he was forced to resign his position as the member of parliament for the army. The general was then arrested for violating army laws where he attended the media interviews something prohibited by all serving army officers. Kale kayihura his hello, general arrested him and too him to prison hence the start of the bias and hatred between the two police officers. Tumukunde stayed out of power until 2016 when president Museveni appointed again as the security minister for Uganda.
General Tumukunde was assigned by president Museveni to infiltrate and counteract all Amama Mbabazi’s work during his stand for the presidency of Uganda. The general was also retired from the army and then promoted from brigadier to lieutenant general. The appointing of Tumukunde, as a security minister by the president was the start of aggressive reactions by the inspector general of police general Kale Kayihura. Unfortunately, the minister has been fired before the expiry of his term of office. Both kale kayihura and the general Tumukunde are bush war veterans who brought president Museveni to Power.

The fights and misunderstanding between Gen kayihura and Gen Tumukunde has been blamed for the increase in criminal offenses in different parts of the country.
The rampant killing of several women especially in September 2017 in Nansana and Entebbe separated the two generals when Gen Kayihura openly accused Gen Tumukunde for the insecurity in the country. Tumukunde was confronted for having collaborated with paddy sserunjoji aka Sobi that whom did the police prosecute.
After the death of Felix late 2017, president Museveni urged Kayihura and his fellow Tumukunde to clean up their police house which statement he repeated last week at the burial of the late Susan Magara who was kidnapped and killed after three weeks.