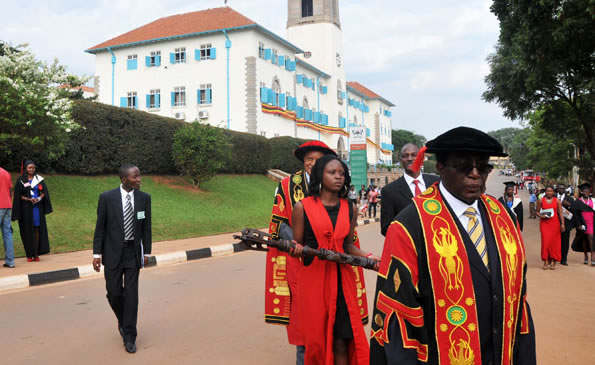 Makerere University ranked 4th in Africa, amongst the top 400 globally
Do you know that Makerere University did it again? Of recent, the oldest and prestigious university was ranked by the 2018 new times higher education index report as the 4th best university in the whole Africa coming after three South African universities that took the first three positions. The progress and Excellency of Makerere University therefore calls for celebrations since Education, awareness and intelligence are key features for every successful country assured of competent leaders and entrepreneurs. Makerere University’s success was released by the 2018 new times higher education index report, which evaluates the performance of all universities in each continent and then the whole world. Three universities in South Africa achieved the first three positions and Uganda’s Makerere was the next. This is a great achievement for the ministry of education and the entire government of Uganda. All universities and higher institutions of learning were evaluated and ranked based on the International outlook, teaching, knowledge transfer and research among others.

Besides ranking as the 4th best university in Africa, the 2018 new times higher education index further ranked Makerere university among the 400 top leading universities in the globe out of 1000 universities that have been registered in the whole world. Oxford University was ranked the world’s top ranking university followed by Cambridge University, California institute of technology, Stanford University and Massachusetts institute of technology from the United States respectively. For the university of oxford, this success was for the second time after last year when the university merged as the leading higher institution in the globe. Also, this years ranking was great news for the university of Cambridge, which merged 2nd position a great move from the 4th position last year. The better and excellent performance of the university of Cambridge is attributed to its research income and research, which improved this year.

Talking of Makerere University, it’s undeniably a great honor attaining bachelor’s degree from this mighty institution. Every school going children aspires to join Makerere after his/ her high school with a great support of their parents. Much as Uganda has registered over 100 universities spread in all parts of the country, Makerere is an exceptional university in terms of professional lecturers, facilities, standards and academic performance. Due to its Excellency, Makerere registers a big number of students from outside countries all over the world to come and share this knowledge.

In its initial stages, Makerere was a mere technical school (1922), which was transformed into a university in 1963, which offered leading courses next to the general degrees from the university of London. Makerere university has a strong record having been taught several prominent leaders for example president Milton Obote who led Uganda to independence, Julius Nyerere and Benjamin Mkapa former presidents of Tanzania, Mwai kibaki the former president of Kenya and joseph kabila the president for the Democratic Republic of Congo. In the previous 68th graduation ceremony early this year (2018), Makerere University rewarded Winnie Mandela

with a honorary doctorate of laws and it was a great privilege to Makerere for having taught these prominent people.

Due to the diversity in the courses offered, different students at Makerere attain different specializations, which help them perform different tasks when they come out of campus. Besides political leaders, most successful people in Uganda in businesses, schools and other professionals are former students of Makerere University.
Professional lecturers who have acquired degrees, masters, PHD and doctorates in respective courses deliver the excellent knowledge. This equips students with all the necessary knowledge to become future leaders.