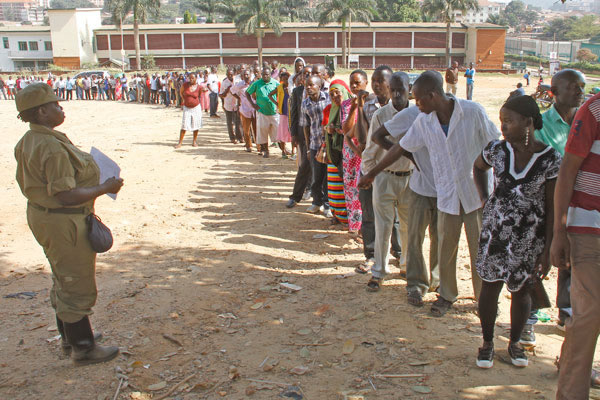 More than 17 million registered Ugandans from 60,800 villages around the country took part in yesterday’s local council elections after waiting for 17 years. Ugandans had last voted their local council leaders back in 2001 during the country’s general elections, which started with presidential and parliamentary elections

The government finally moved to organize these elections in an effort to implement section 26 of the Local Government Act, 1997 which stresses that the local councils assist in maintaining law, order and security as well as receive and solve problems or disputes in villages. They also carryout community sensitization and identify beneficiaries of government programs, they also assess and recommend candidates for some government jobs and issue the primary endorsement documents to the citizens.

The voting finally took place after many occasions of postponing the exercise by the electoral commission. Local council elections were supposed to follow presidential and parliamentary elections back in 2011, as part of local government elections but they did not materialize. Since then the government has been scheduling different dates for these elections up to 2016 when the country was going into another presidential elections, unfortunately still the local council elections were not facilitated and again failed to take place. Finally the government moved to schedule the elections in Nov last year but it failed due to a few challenges like insufficient funds by the electoral commission to facilitate the exercise and other legal challenges from those who were opposing their timing. After such a long period of waiting, Ugandans were finally able to vote their local council leaders and they are full of excitement and much expectations in their new leaders.

Although the exercise was a bit hectic since the voting system required the voters to line up behind their candidates, they were not bothered by this arrangement and everyone was focused on having their candidate win the race.

The permanent secretary in the in the local government ministry says that elected LC1 chairpersons and their executives in general will help in monitoring and supervising government programs.

In addition, Article 50 of the Local Government Act 1997 (amended in 2015) indicates the following roles of the village committees;

Overseeing the implementation of policies and decisions made by the council.
The Act also states that the village executive committees under the chairperson are expected to assist in the maintenance of law, order and security, they also initiate, encourage, support and participate in self-help projects and mobilize people, material and technical assistance in relation to self-help projects.

The committees are also expected to vet and recommend persons in their areas for recruitment into the Uganda Peoples Defense Force (UPDF), the Uganda police Force and the Uganda Prisons Service. Further, the local council committees are expected to serve as a communication channel between the government, the district or higher local council and the people in the area. Other functions according to the Act include monitoring projects and other activities undertaken by the government, local governments and non-government organizations in their area.

Among the various roles the local leader is expected to execute include the following;

Presiding over the council meetings and monitor the general administration of their areas. The new leaders will also spearhead the reoperation of the village and parish courts across the country to handle the administration of justice on civil disputes. This is expected to reduce case backlog in formal courts and to reduce the congestion in prisons.

Village and parish courts have the jurisdiction to handle cases relating to debts (below shs 2 million), contracts assaults and battery, conversion, property damage, trespass, customary land disputes, civil disputes under customary law including customary land, divorce and inheritance. In addition, village and parish courts also have jurisdiction over causes and matters arising out of infringement of by-laws and cases of civil nature involving children.

Local council leaders also play a key role in promoting economic activities like tourism. Leaders in areas with tourist attractions like game parks have supported activities like gorilla tracking in Bwindi, cultural tours and game viewing through working hand in hand with park authorities to sensitize the people about tourism and conservation benefits.They also encourage residents to take part in tourism activities which also helps them to earn a living to improve their standards of living.

Though plans to restore and empower these village courts are underway, there are doubts that the new village courts will be fair since only the chairperson elects members unlike in the 1990s where all the village council members would be elected under adult suffrage.