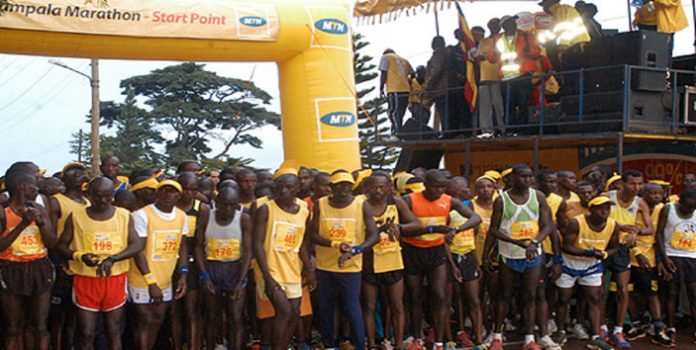 The 2018 Kampala Marathon 2018 is finally here with the participants already warming up for the race due to kick off at 6AM tomorrow Sunday 25th November 2018 at Kololo Independence Grounds.

The event is increasingly becoming one of the many tourists highlights in the country through attracting hundreds of foreigners to take part in a way of enjoying their Uganda tours while exercising for body fitness.

This year’s event marks 15 years of the competition while MTN Uganda will use it as part of their celebrations that mark the Telecom’s 20 years of operation in Uganda.

This year MTN Uganda launched other regional Marathons as new routes in a bid to spread the event across the country. The regional races that were organized to precede the main event in Kampala were conducted in Gulu (North), Mbale (East) and Mbarara (West).

According to the General Manager Corporate Services, Mr. Anthony Katamba, the addition of these regional races indicates the presence of MTN everywhere you go in the country. He added that they believe that the MTN Kampala Marathon 2018 will play a vital role in connecting and uniting Ugandans to causes that make a difference in the lives of thousands.

As the norm has been for the event, this year’s marathon runs on a theme of “Improving Maternal Health in Uganda’. The theme aims at ensuring safe childbirth for expectant mothers regardless of their means or where they come from.

In the previous years, the MTN Kampala Marathon has been running on various themes that aim to improve people’s standards of living through offering the proceeds from the event to support such causes. Some of the previous projects supported by the marathon include; helping expectant mothers, resettling people displaced by war in Northern Uganda, relocating mudslide victims in Bududa, delivering clean water and improving sanitation in communities and schools. The event has raised close to UGX 3billion since its launching 14 years ago and the money has benefited several causes and communities.

Unlike in the previous events, this year’s event will include a new race of 5km family run to make a total of four races. Other categories include 10km run, 21km half marathon and the full marathon race of 42km.

The event is a social responsibility initiative of the MTN Foundation and it is sponsored by several partners including Huawei, New Vision, Stanbic Bank, Spedag Interfreight Uganda Limited and Rwenzori Mineral water.

The event is expected to attract over 20,000 participants who will take part in the different race categories. Participants have been registering with UGX 25,000 a fee that also involves collection of a kit to be used in the race. As it was last year, the winner of the 42km marathon is expected to take home UGX 20million while 21km half marathon will bag UGX 4.5million and 10km race winner will get UGX 1.5million. Women categories for the above races also have the same amount for each category winner.

MTN Uganda has also confirmed over 300 elite runners from Uganda and across the region to take part in this year’s marathon in Kampala. Among the regional elites include Kenya’s duo Sammy Kipngetich and Rael Kimaiyo who will be aiming to defend their 42km titles while Uganda’s duo Doreen Chesang and Daniel Rotich will also be striving to defend their 21km titles.