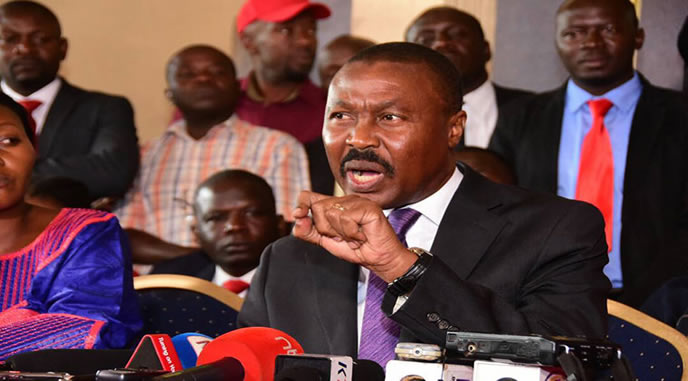 Former Forum for Democratic Change President Gen Mugisha Muntu has today officially announced his departure from the party during a press conference held at Hotel Africana in Kampala.

Muntu, who had announced his plans to leave the party to the public two days ago, claims that he has made an informed decision since he has been conducting a number of consultative meetings around the country over the matter since the beginning of the year.

He has announced that plans are under way to launch the new political group formed called the “New Formation” before Dec 25th this year. Muntu also added that they have created an online website for the new formation to interact and keep in touch with the supporters.

The departure of Mugisha Muntu and a few others from FDC including the party’s former Permanent Secretary Ms. Alice Alaso has come as a shock to many Ugandans especially the party supports given the long time they had spent as loyal party executives.

Muntu points out that the difference in the approach that the party has to take in order to take over power has been the major cause of his breakaway. Whereas Muntu and those who believe in him preferred a more organized and grass root oriented party structure, he insists that those in the party leadership supported a different approach of defiance so as to take over the national leadership.

He claims that even when he was still party president between 2012 and 2017, he could not implement most of his ideas due to opposition he faced from other leaders that are based on this ideological differences. He adds that with this new formation, they will be in a better position to implement their ideas with minimal opposition and they will be able to sell them to their supporters countrywide in a more organized way.

The Former UPDF commander states that even though has decided to come with a new political party, he is still part of the opposition in Uganda at large and he promises that he will continue fighting together with other opposition party leaders to achieve their aim of changing leadership in the country. Muntu invited both members of the Public and those that may be in other parties who share the same views with them to come and join him in the new formation for a new opposition approach.

However, there have been several criticisms coming from different members of the public who questioned Muntu’s movement. Some of these posed questions to him asking him why he only thought of breaking away from FDC after losing the election as party president late last year. They wonder whether Muntu would have done the same if he had retained his position as party president hence naming his actions as selfish and destructive to the opposition in Uganda.

On the side of FDC, Muntu’s departure has been described as a blow to the party by some executives in the party who claimed that he will highly be missed while others were adamant saying that he had already made a decision to leave the party even when he was still president.

To the rest of the public, it is remained to be seen who will be joining Muntu in his new struggle and how far his new party will go in achieving its goals.