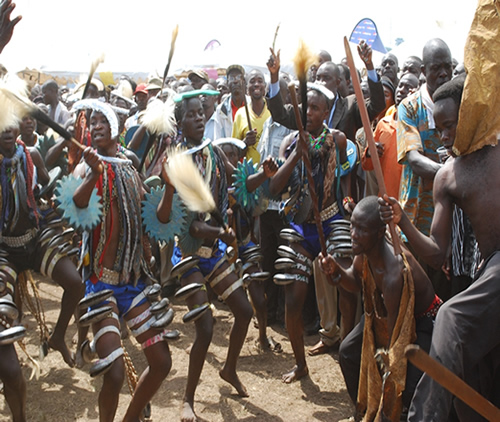 President Yoweri Museveni and his Kenyan counterpart, Uhuru Kenyatta are set to grace this year’s inauguration ceremony of Imbalu in Mbale, Eastern Uganda

Imbalu is a circumcision ceremony among the Bamasaba (Bagisu) society, which is rooted, in a revered culture that relishes the rite of passage to manhood. The Inyembe, a knife used to circumcise has been for generations used to separate men from boys.

This periodical cultural ceremony which is filled with fun and horrific moments is one of the most prominent that a Uganda’s cultural Tour has to offer though only a few lucky visitors that may be found on their Uganda Safari during its fateful season can have a chance to enjoy it.

This year’s inauguration ceremony is taking place this Saturday at Mutoto Cultural Grounds in Mbale town and preparations are in high gear ahead of the official launch of the festival.

The two heads of state have already confirmed their attendance as clarified by the coordinator of the celebrations Mr. Mathias Nabutele. The presence of the two presidents makes it unique from the previous ceremonies that have not seen the participation of such dignitaries before.

President Uhuru Kenyatta from Kenya will lead a delegation of Kenyan Bamasaba including Bungoma, Trans-Nzoia and Bukusu to the ceremony at Mutoto. Mutoto is a sacred place where the first Mumasaba (Mugisu) was reportedly circumcised.

The Imbalau ceremony holds a great significance among the Bagisu. It is an age-old tradition, which defines and unites people in the Bugisu region comprised of Mbale, Manafwa, Bulambuli, Sironko and Bududa districts.

The ceremony is hugely embraced and respected by all the people in the region and it is used as the measure to recognize the young men that they have crossed over to manhood. Nobody, regardless of their age can be respected as a true man before they fulfill this ritual.

Imbalu is always held in an even year and usually kicks off in the month of August and its climax in December. It is the most celebrated cultural ceremony across Uganda as it is carried out in all parts of the country where the Bagisu are found. Therefore today there is no need for the boys to go back to their homeland in Bugisu to fulfill this manhood obligation.

During this period huge multitudes of people can be seen in towns and villages in several parts of the country accompanying and dancing together with the candidates of circumcision. The movements are always full of excitement and jubilations, as traditional Bagisu drums are sounded accompanied with their traditional folk songs and dance.

The celebrations and movements around communities usually take around 7 days before the candidates are finally circumcised. During these movements, the candidates are always given different gifts including money, livestock, food among others as a way of congratulating them for reaching this traditional milestone that shows their brevity and also to encourage them to be brave and endure the pain during the circumcision.

The Uganda Tourism Board (UTB) has already partnered with the Bamasaba Cultural Institution, the main organizers of the ceremony to upgrade Mutoto Cultural Site in a bid to boost tourism by enhancing Uganda Cultural Tours of which the Imbalu ceremony is part. The board also announced that the circumcision fete had been elevated to a carnival and added to Uganda’s tourism products.