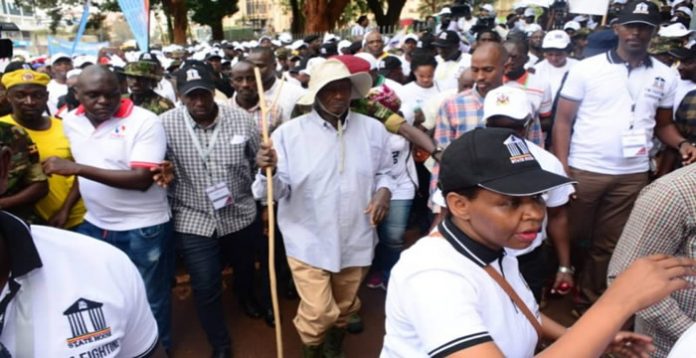 President Yoweri Museveni has this morning led thousands of Ugandans in the walk against corruption in the capital city Kampala. The anti-corruption walk is under the theme “A corruption-free Uganda; It stars with me”.

The President and other participants have walked a distance of about 4km from Constitutional Square in the city center to Kololo Independence Grounds.

Among other high profile walkers included Cabinet ministers, Members of Parliament led by Speaker Rebecca Kadaga and her deputy Jacob Oulanyah, religious leaders, members of the civil society and members from the public also joined the walk.

President Museveni decided to lead the anti-corruption walk to highlight the efforts made towards eliminating the vice and he is also expected to address the masses about the topic of zero tolerance to corruption.

Other officials who are also expected to address the public about the theme include Speaker of Parliament Rebecca Kadaga and Chief Justice Bart Katureebe on behalf of the judiciary.

Meanwhile, the anti-corruption walk in the city center paralyzed traffic flow in the other parts of the city especially along busy roads entering the city center like Entebbe road. Motorists especially those of public transport were being stopped at least 3km away from the city center by traffic police in order not to interrupt the walk. From here passengers were forced either to walk the remaining distance to the city center or use motorcycles at a fee.

This sparked anger among the passengers who accused the government of failing to fight corruption among its own officials and rather resort to a symbolic walk that carry less significance in the fight against the vice.

How does Uganda rank globally in terms of corruption?

The Corruption Perception Index (CPI) that is published annually by Transparency International ranked Uganda as the 149 least corrupt nation out of 180 ranked countries in 2018. The Corruption Perception Index ranks counties every year according to perceived levels of public sector corruption, as determined by expert assessment and opinion surveys.

Why is corruption so rampant in Uganda?

Much of the corruption in Uganda has been blamed on the weakness of the government to fight it and educate the masses against. The government is blamed for failure to put up strong laws that can help to control the vice, consequently allowing several government officials and other public servants who have gone on to exploit these weak laws and embezzle government funds making the country to lose millions of dollars through the vice.

Who are the culprits of corruption in Uganda?

What is the government doing to fight corruption in Uganda?

Much as the vice of corruption has been heavily blamed on the government, the same has tried to set up several institutions to help and curb corruption. These include the office of the Inspector General of Government (IGG), the anti-corruption commission, among others. The Public Accounts Committee was also set up in parliament responsible to demand accountability of public funds that are spent by government officials and institutions. Several government officials who have been indicted of corruption cases have also been given sentences and other penalties including jail and suspension from their offices. The government is also proposing setting up CCTV cameras in public offices to spy on those who may be tempted into bribery in such offices.

Is it possible for Uganda to overcome corruption?

Well, this remains a long term question that will rumble on among Ugandans though many believe that until the government does enough to combat this vice, it will remain haunting the country. Several strong measures that have been suggested for the government to adopt in the fight of corruption include amending more strict laws against corruption, giving harsh punishments to those that have been convicted of corruption including confiscating their property and giving them long jail terms, among others. The government has been encouraged to enroll teaching children at different levels of education about the dangers of corruption while other government institutions like the police have also been advised against the vice.