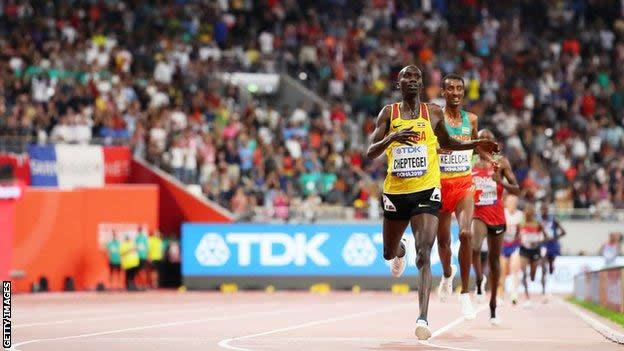 The 10,000m world champion Joshua Cheptegei has broken another record of 10km marathon in Valencia, Spain after setting a new time of 26 minutes and 38 seconds.

The 23-year-old Ugandan reached this milestone after surpassing the previous record that was by Kenya’s Leonard Komon in 2010 by six seconds.

In October, Cheptegei was crowned 10,000 meters’ world champion in Doha, Qatar and this came in addition to the 10km cross country world title that he had won in Denmark in March.

Cheptegei is increasingly distinguishing himself as a record breaker having broken the 15km road world record in 2018 after running for 41 minutes five seconds in Nijmegen, Netherlands.

From the start, Cheptegei looked that he was headed for the record running at an average pace of two minutes and 40 seconds per kilometer and this saw him pass through 5km in just 13 minutes 24 seconds.

Cheptegei expressed his joy after learning that he had set a new world record. “What a year it has been, I knew that Valencia was going to be a really fast course, one of the fastest in the world. So to get to achieve what we came here for is something really special. This year has made me so happy,” he said.

“World Cross Championship in Denmark, 10,000m world champion in Doha and now the world record here in Valencia,” he added.