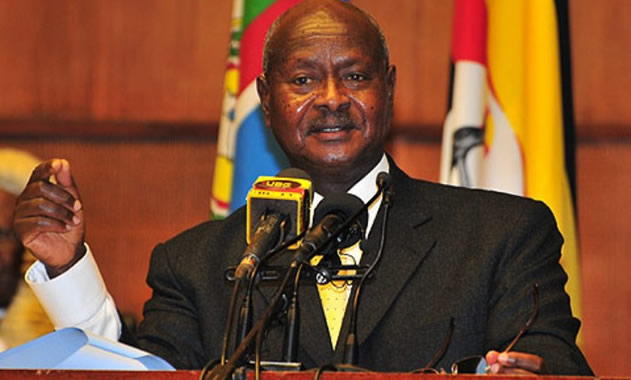 Uganda’s Museveni Ranked Among Best Presidents In the World
A recently published report from New York University and World Bank experts ranks H.E Yoweri Kaguta Museveni the Pearl of Africa’s president 12th in the world in terms of influencing economic growth. The report released by World Bank economist Steve Penning’s and New York University economics professor, William Easterly indicates that Museveni is one of the best leaders with a significant positive impact on their countries’ economic growth. The two experts define the best leaders, as any leaders for whom the estimated leader effect is positive and significant at the 95% level and the worst leaders are those with negative and insignificant leader effects.

Easterly and Hennings ranked 24 world leaders and Museveni who has president for 32 years came in the 12th position scoring higher than many powerful leaders globally including the former Prime Minister of Singapore Lee Kuan Yew and Park Chung-hee former president of South Korea between 1963 and 1979. Museveni’s significant contribution to Uganda’s economic growth is said to be a record 2.42% with shrinkage of only 0.78% since he came to power in 1986.

The findings that were entitled “Shrinking dictators: how much economic growth can we attribute to national leaders?” ranked Senior General Than Shwe of Burma as number one for being the most influential leader who steered his country’s economic growth at 3.95% and shrinkage of just 0.71%. He was the head of the state of Burma between 1992 and 2011 as Chairman of the State Peace and Development council (SPDC).

Also, the report established that leaders like Yoweri Museveni and Seretse Khama of Botswana rank higher than Lee Kuan Yew of Singapore partly because they did well in relation to the lower average regional growth in Sub Saharan Africa compared to East and South Asia.

Former president Idi Amin Dada was also ranked as the 5th worst leader in the world after causing an economic slump of -3.38% while he was president from 1971 to 1979 with shrinkage of 0.69%.

Assessing Museveni’s Contributions
Museveni has been at the helm of Uganda’s political and economic transformation that the previous governments had crippled prior to his coming to power in 1986. The worse economic situation was its climax with the rise to power of Amin in 1971. The recent statistics given by Finance Minister Matia Kasaija during the National Budget reading for the financial year 2018/2019, the infrastructure development is at its peak with 5,350km total of paved roads compared to 987km of 1986.
The government has also established in the new financial year to prioritize road maintenance to strengthen the already made investments and also embark on construction of another 600km of oil roads. 400km will also be upgraded by tarmac while 200km will be rehabilitated together with construction of 15 bridges.

The Ministry of Finance, Planning and Economic Development also indicates that the general quality of lives and standard of living of Ugandans have improved tremendously together with the increase in income. The figures from the ministry show that despite the continued increase in population, the average per capita incomes have doubled in the last 8 years from Shs 1.35m if the financial year 2009/10 to Shs 2.68m in 2017/18.

The projections from the ministry show that Uganda’s economy is expected to grow at 6% and 7% in the new financial year and 2019/20 respectively. Other areas where progress has been made include the employment sector with the national employment rate reducing from 11% to 8%, access to electricity grid has increased to 22% in 2017 from 14% in 2013 and access to water has also risen from 68% to 78% during the same period. The revenue collections per annum have also increased, for instance in the financial year 2005/06 the total revenue collected was Shs 2.23 trillion compared to the estimated Shs 20trillion to be collected in the next financial year.

In addition to the promising projections, a recent study at Harvard Center in USA predicted that Uganda’s economy will be one of the fastest growing in the world by 2026 and beyond. The President Museveni while speaking at the recent state of the nation address assured Ugandans that the NRM government has already negotiated and arranged with other African states to promote the market integration of Africa through different economic bodies like EAC, COMESA and CFTA in order to provide means for the absorption of the goods and services produced by the Ugandans to boost the general economy.

The robust peace and security that the NRM government under Museveni created has been greatly credited for the prevailing economic growth. The country has been politically stable since the demise of Lord’s Resistance Army (LRA) rebels that were led by Joseph Kony. Other rebel groups like the Allied Democratic Forces (ADF), Alice Lakwena were all suppressed plus the disarmament of the Karamajongs in Northeastern Uganda has created lasting peace and stability in that sub region.Also, the peace in Uganda has encouraged smooth flow of tourism activities to all parts of the region such as gorilla trek packages to Bwindi and Mgahinga, game viewing safaris in Murchiosn falls, Queen Elizabeth National park, Lake Mburo Np & Kidepo valley Np, and other tourism activities all over the country.

In addition to his tremendous contribution to Uganda’s economic growth and the lasting peace and stability, President Museveni has also registered success in different areas and the most notable ones include restoration of freedom like freedom of speech, press freedom, freedom to worship. Relative democracy has been promoted evidenced by the preparation of elections for the nationals to vote their own leaders despite a few anomalies that sometimes hinder their free and fair aspect. The president has been highly commended for his effective foreign policy that has produced some good fruits in countries like Somalia and South Sudan where he deployed the army to strengthen their security. Museveni has also worked hard to ensure that Uganda is at par with all her neighbors including Tanzania that had trouble with Uganda during Amin’s regime. The president has also tried to boost other sectors like education through introduction of free universal education the health sector has been boosted by introduction of free and affordable medical services. The agricultural sector is also promoted by assisting farmers with free and affordable quality inputs.

However, despite all his great contribution to the development of the country, president Museveni has also been widely criticized for his long stay in power and his government has always been accused of corruption and some other vices like tribalism and favoritism.

When all has been said and done, the president deserves a credit for inheriting crippled political and economic systems and transforming them into one of the fastest growing both in the region and Africa at large.