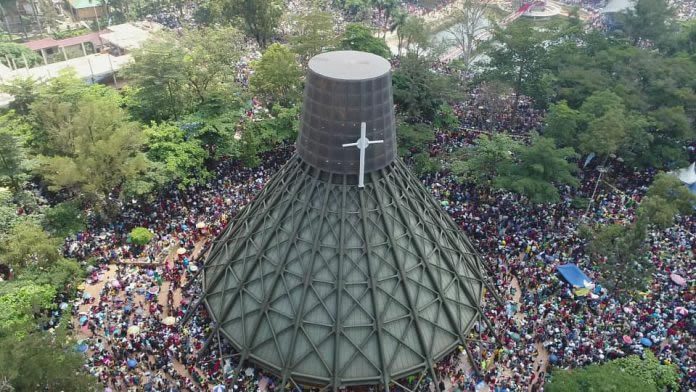 Pilgrims from different parts of the world have continued to pour in at the Namugongo Martyrs’ shrine to celebrate martyrs’ day.

Today Uganda is joined by the world to celebrate this year’s Martyrs’ day at namugono martyrs shrine.

Roads leading to both the Catholic and Anglican Martyrs shrines at Namugongo are being walked on foot with no possibility of using any automobile.

The security at the shrines is very tight with several checkpoints and all pilgrims are checked before accessing their final destinations.

The Catholic shrine is almost full even though more pilgrims are still arriving with the hope of accessing this site and mass is already underway.

Due to massive movements to the site, transport fares to Namugongo have been hiked with commuter taxis charging as high as Shs6,000 compared to the normal fare of Ushs2,500. Boda-bodas from Kireka charge 8,000 to Namugongo from the usual Shs2,000.

The Uganda Martyrs involved 23 Anglican and 22 Catholic converts to Christianity who were executed on orders of former Buganda king (Kabaka) Mwanga II between 31 January 1885 and 27 January 1887.

The main reason for their execution was their refusal to denounce their new faith as required by the Kabaka who saw the act as a threat to his tradition and Kingship.

Since their execution, the Martyrs have been celebrated worldwide among the Christian community as great heroes of faith.

The Catholic Martyrs were canonized by Pope Paul VI on 18 October 1964 and he also mentioned of the Anglican Martyrs during the canonization ceremony. “Nor, indeed, do we wish to forget the others who, belonging to the Anglican confession, confronted death in the name of         Christ.”

Every year hundreds of thousands of pilgrims walk to Namugongo from all parts of Uganda and from the neighboring countries. Walking symbolizes that the believers share the pain and sacrifice that the martyrs went through as they were forced to walk to Namugongo, their site of execution while being tortured by the Kabaka’s soldiers.

Pilgrims from very distant areas walk to Namugongo in groups for about 400km and they usually start their journey a month earlier. There are always several stopovers along the journey to rest and gain some energy for the next phase of the journey. They usually reach Namugongo 2-3 days earlier before the real day of the celebration on 3rd June.

Yesterday the President of Uganda Yoweri Museveni joined throngs of pilgrims at Namugongo with Mama Maria Nyerere, the widow of former Tanzania President Mwalimu Julius Kambalage Nyerere. She came along with about 500 pilgrims from Tanzania.

The president described his former Tanzanian counterpart as one of the most important personalities in the history of African politics.

“For about 4.5 million years ago, which the Western world labeled the dark ages of Africa’s underdevelopment, no African fought for the struggle of Africa’s unity and independence like Nyerere did. For us Ugandans, we are grateful,” Museveni said.

The president was speaking during the annual commemorative Mass of the Julius Kambarage Day at Namugongo Catholic Martyrs Shrine. The Mass is held to pray for the beatification and canonization of the late Julius Nyerere to sainthood. His Mass always precedes the Martyrs day on 3 June.