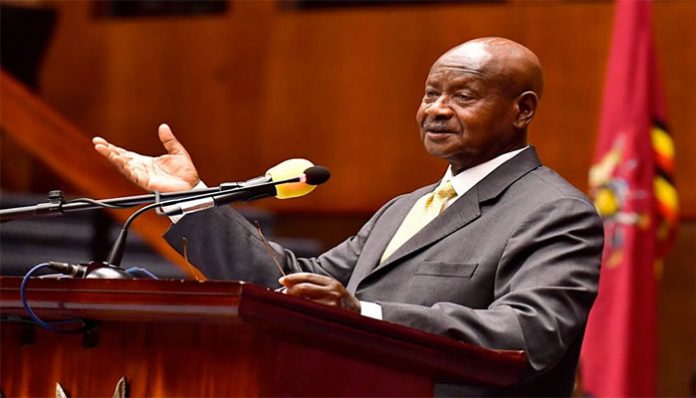 President Museveni yesterday addressed the parliament while delivering the State of the Nations Address at Kampala Serena hotel.

The President talked about a variety of issues concerning the country including the economy, security, agriculture, trade, land, energy and minerals, works and transport, tourism, corruption, human capital development, among others.

Mr. Museveni started his speech by recognizing the presence of several dignitaries in the descending order of their respective titles and offices.

As usual, the president tackled each issue on his agenda in detail, highlighting the achievements and the challenges still faced as well as the way forward.

The president started by mentioning the names of some key public figures that have died since his last state of the nation address last June asking the audience to stand up and observe a moment of silence in memory of the deceased.

Other the president mentioned include; the late Assistant Superintendent of Police, Mohammad Kirumira, the late Ambassador Julius Onen, the Permanent Secretary – Ministry of Trade, Industry and Co-operatives, the victims of the Mutima beach bound boat that capsized on Lake Victoria, the 4 Kenyan pilgrims who were knocked by a hit and run car when coming to Uganda for Martyrs’ Day, Bududa people who recently lost their lives in the mudslide and more others.

The president also reminded his audience about the significance of the date of 6th June. He said that it was on the 6th June 1944 when the allies in the 2nd World War executed an amphibious landing in German-occupied by France at Normandy beaches and this happened three months before he was born.

“The 6th of June, 1981, aged 36 years and leading the PRA (Popular Resistance Army), I departed Matugga by car, passed through Buwama trading center and embarked into a boat at Katebo landing site to cross the more than 200 miles Lake to Kenya to proceed to Libya to look for the weapons of the struggle. Today, 6th of June 2019, here we are on the occasion of the State of the Nations Address. There is something interesting about the 6th of June.

The president started with the issue of security and said that the NRM government remains committed to ensuring a securing a secure and peaceful Uganda.

“This has come about by promoting and upholding patriotism, democracy, and good governance as core values for National socio-economic transformation. Significant focus has been placed on professionalizing and modernizing the Uganda Peoples Defence Force (UPDF) and building the Uganda Police Force (UPF) capabilities.” Said the president.

The president also added that the National Security Council sat and reviewed the rampant killings, robbery and rape cases that had intensified in the past months and made some conclusions to deal with the crimes.

“UPDF works with other security agencies to deter or curtail any acts of lawlessness. The recent peaceful holding of the Martyrs’ Day, where an estimated 3 million people turned up, shows that Police and UPDF already have good capacity.” Added the president.

Concerning Uganda’s economy, Mr. Museveni started by giving some statistics that indicate economic growth since he came to power in 1986.

He lauded this growth rate saying that not even European countries or USA has grown its per capita income at the same rate as Uganda over a period of 3 decades. Mr. Museveni said that only East Asian Tigers sustained per capita income growth of 5.6% during their intense period of transformation between 1960 and 1990.

However, the president admitted that this is still below the level required to the attainment of the middle-income status, the renewed impetus of the economy and the large economic base being created will catapult the economy to prosperity within a short period in the future.

Mr. Museveni said that if the Purchasing Power Parity (PPP) method of computing GDP is used, Uganda’s economy stands at $88.6billions ($2,400 per capita) which puts the country in a middle-income status already. However, the president said that they are not going to use shortcuts.

“We shall use the export promotion and import – substitution routes to storm across the medium income barrier, not just the purchasing power route on account of our low cost of living advantage, but by the exchange route method. It is now within reach.” The president said.

The president also pointed out the key factors that form the basis for positive outlook of Uganda’s economic growth and development, they include; industrialization, increasing production and productivity in the agricultural sector, the commencement of oil and gas production and work on the oil pipeline and the refinery.

Others include improving efficiency in the execution of public investment, harnessing the benefits of regional integration through trade and strengthening intra-African trade and improving labour productivity through skills development tailored to labor market demands.

Concerning international trade, the president said that Uganda’s export revenue of goods and services grew at 8.2% in 2018/19, amounting to $7.012 billions of which $3.8 billion earnings came from trade in goods, $1.89 billion from services and $1.312 billion from remittances.

The other key issues that made part of the president’s speech include agriculture, land, housing and urban development, energy and mineral development, works and transport, and tourism.

The president also talked about corruption, human capital development, among other issues in his speech.