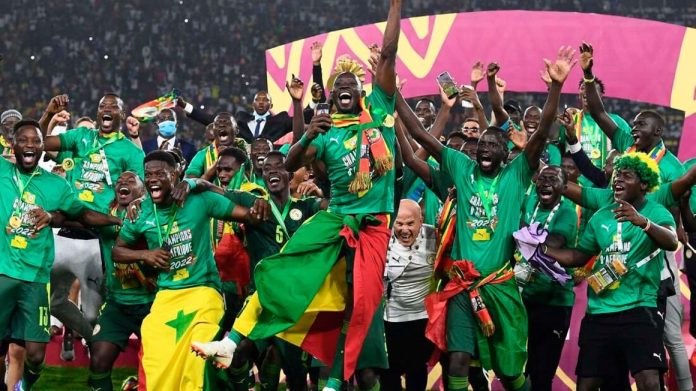 Senegal beat Egypt 4-2 on penalties on Sunday to win the Africa Cup of Nations for the first time in their history. The match finished goalless after extra time before Senegal went on to win on penalties with Liverpool star Sadio Mane scoring the decisive spot kick.

The Lions of Teranga finally won their first Afcon final at the third time of asking after previously losing to Cameroon and Algeria in 2002 and 2019 respectively. Sadio Mane had failed to give Senegal a lead after his penalty was saved by Egyptian impressive goalkeeper Gabaski 3 minutes into the game. However, the 29-year old was not to be denied again when he stepped up to take the decisive penalty which handed his country the trophy.

Senegal coach Aliou Cisse can finally celebrate after winning his first continental title both as player and coach after failing on several attempts. He was captain of Senegal when they the 2002 final to Cameroon with him missing a penalty during the shootout. In 2019 as a coach he also witnessed Senegal failing to lift the title after losing 1-0 to Algeria. However, his patience and perseverance has finally paid off with Sunday’s victory and he has become the first coach to win Senegal the continental title.

The two Liverpool teammates went head-to-head against each other in this hotly contested encounter which was bound to end in joy for one and tears for the other. However, there was early unexpected Drama between the pair when Mohammed Salah appeared to reveal Mane’s penalty secrets to his goalkeeper Gabaski as the Senegalese prepared to take spot kick. After noticing, Mane quickly intervened and appeared to be forcing the goalkeeper back to his goal line something which seemed to upset Salah. Shockingly Gabaski went on to save Mane’s penalty which further proved that Salah had really told him the exact position Mane would put the ball. Salah was also involved in another confrontation with the referee who was seen gesturing to hand him his whistle and cards to officiate the match after several complaints from the Egyptian captain.

It was another disappointing night for Mohammad Salah after seeing his second attempt to win silverware and a trophy for Egypt end in failure. He had hoped for success this time after losing the 2017 final to Cameroon but again it was not meant to be. However, the 29 year will not wait for so long to avenge this loss with Egypt playing Senegal again next month in a play-off for a spot in World Cup. The two sides were drawn against each other as one of the five fixtures which will contest in two-legged playoffs to determine the five teams that will represent Africa in this year’s World in Qatar which kicks off in November.

Cameroon the hosts finished third following the their elimination by Egypt in Semifinals. They defeated Burkina Faso 5-3 on penalties to clinch the third position. Cameroon had to come from 3 goals down to draw 3-3 after extra time and force the game into penalties. Burkina Faso on the other hand settled for fourth after disappointingly surrendering their 3-goal lead.

Ivory Coast were officially handed the flag as the hosts of the next tournament in 2023 during the closing ceremony in Olembe stadium. The Elephants endured a disappointing campaign after their impressive start to the tournament ended at Quarter Final after being eliminated by Egypt on penalties. The 2015 Africa champions will hope to make amends at home next year as the hosts and add to their trophy cabined a third title.

Blog Myuganda - February 16, 2022
0
Archbishop Janani Luwum was a renown human rights activist in addition to his liturgical duties before his mysterious death in 1977. As...