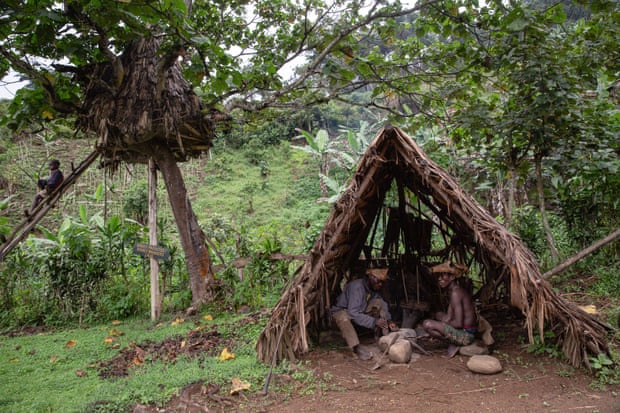 The Batwa people of southwest Uganda are usually visited briefly by tourists as they conclude their gorilla trekking safaris in Bwindi Impenetrable National Park and Mgahinga Gorilla National Park for their unique culture and entertainment. But there is so much more to learn about this unique forest tribe which lives alongside the endangered mountain gorillas.

Who are the Batwa?

The Batwa pygmies are a semi-nomadic tribe found in the mountainous region of southwestern Uganda who lived a typical hunter-gatherer lifestyle for thousands of years. The Batwa men used rudimentary tools like spears, bows and arrows to hunt for animals which included birds, bush pigs, monkeys and small antelopes while women collected wild honey, fruits and berries. Their activities were entirely carried out in the rainforest where they lived in grass huts and dressed in animal skins.

Beginning of the struggle

With time, intruders came in and started cutting down forests to create farmland and grazing cattle while pushing Batwa to smaller and smaller areas. In 1930s, the situation got worse for Batwa as government moved in to declare the remaining forests as protected reserves. This move was aimed at preventing further deforestation to protect the critically endangered mountain gorillas and other species but it made Batwa lose their legal claims to the land they occupied for many centuries.

In 1991, the reserves were turned into Bwindi Impenetrable National Park and Mgahinga Gorilla National Park which led to the eviction of the Batwa. After this final blow, the Batwa started living on fringes of the parks where they were also threatened with punishments for encroaching on protected land.

Currently there are just over 3,000 Batwa left and they continue to live in extreme poverty, still dwelling in their makeshift grass-huts while constantly threatened to be evicted. The Batwa community is generally marginalised and excluded from mainstream society with limited opportunities for jobs, education and healthcare. They have struggled to adapt to the changing times and constantly treated as outcasts by other tribes. Despite their suffering after being evicted from their land to promote conservation and tourism, the Batwa did not benefit from the proceeds of the $600 paid by each tourist who visits mountain gorillas.

A change in fortune

In 2000, the Batwa community received a turnaround in their fortune when members of the community formed the United Organisation for Batwa Development in Uganda (UOBDU). The organisation is working to support the tribe in areas like income generation, education and housing. One of its accomplishments so far is setting up cultural experience tours through which tourists visit the community and spend time with the Batwa. Visitors are introduced to the way how Batwa live and taught about the tools and tricks they used to survive during their times in the forests. This has presented them with an opportunity to directly get involved in running their own tourism projects unlike before when outsiders could bring visitors and fetch money through treating Batwa as mere tourist attractions.

Small Batwa villages which consist of about a dozen families are located on the fringes of Bwindi and Mgahinga national parks and around Lake Bunyonyi and this is where visitors find them for a cultural tour. At Mgahinga local guides take visitors through the Batwa Cultural Trail where they show them how they trap animals using snares made from trees, forage for food and how they use plants to make tools and medicine. This trail ends at Garama Cave where the Batwa entertain visitors with their spine-tingling songs and music. At Bwindi, there is a Batwa Cultural Experience which visitors enjoy after their gorilla trekking excursion in the park. A community visit to the Batwa introduces tourists to their displays of traditional hunting and fire-making skills as well as music produced using wooden instruments. Visitors also learn how Batwa build their huts including the high-up nests they set up in trees to watch over for predators which attack their small children. Through translators, Batwa elders tell their family stories to their visitors narrating how they lived their old lives in the forests.