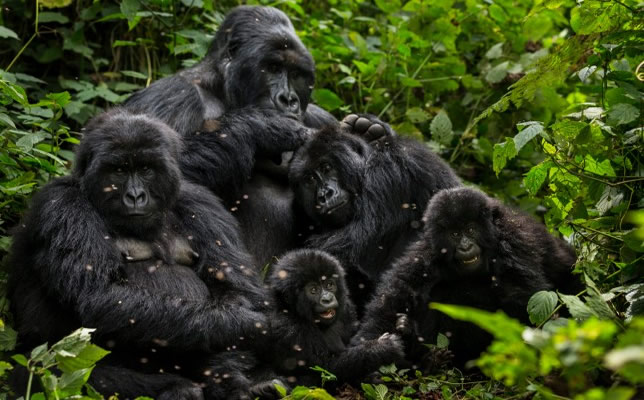 Uganda’s tourism industry was last week hit by some bad news of the death of four mountain gorillas in Ngahinga Gorilla National Park in the southwest of the country. The four great apes were reportedly struck by lightning that resulted from heavy rains that showed the park early last week.

The gorillas comprised of 3 adult females of which one was pregnant and a male infant. They were found in the park with “gross lesions” on their bodies indicating electrocution. Conservationists from The Greater Virunga Transboundary Collaboration (GVTC) called the tragedy a “big loss for the species”.

The four deceased gorillas were part of the 17-member Hirwa family that has been living in the park since it crossed over from Rwanda last year.

Mr. Moses Turinawe, the Warden in charge of tourism at the park gave an account of the death of these giant primates. “It was raining heavily and the gorillas took refuge in trees,” he said. He added that the tragedy was noticed by a team of five rangers who were also taking shelter from the rain not far away from the Hirwa group. After seeing lightning and thunder striking the trees where gorillas were, gorillas got sacred and were heard making unusual sounds. The silverback (leading male) and other young ones started making funny calls.

The heavy rains prevented the team of rangers from getting closer to the gorillas and they could see one of the gorillas was not moving as the silverback was trying to lift her up. Later four carcasses were found at the scene by another team that comprised of representatives from Rwanda Development Board (RDB) and Uganda Wildlife Authority (UWA)

According to Mr. Andrew Seguya, the executive secretary of the GVTC, the surviving 13 gorillas of the Hirwa family were found and are feeding well. The samples from the post-mortem were taken for testing with confirmation of the cause of death expected in the next 3 weeks.

The global population of mountain gorillas is just over 1000 individuals which are restricted to protected areas in Uganda, Rwanda and Democratic Republic of Congo.

Mgahinga is part of the Virunga Massif range mountains straddling the borders of Uganda, Rwanda and Democratic Republic of Congo. Other parks that protect mountain gorillas in region include Virunga National Park in DR Congo, Volcanoes National Park in Rwanda and Bwindi Impenetrable National Park in Uganda which protects more than half of their global population.

Mountain gorilla was removed from the list of critically endangered species in 2018, thanks to the intensive conservation efforts including anti-poaching patrols and veterinary care.

Gorilla safaris to see mountain gorillas are done in all the 3 countries but are pronounced in Uganda and Rwanda because they are more peaceful and stable compared to the conflict-hit eastern DRC where gorillas are found. However, of the two, Uganda offers the cheaper gorilla trekking permits at $600 per person compared to Rwanda’s $1,500 per person.

Gorilla trekking is the most popular safari activity in Uganda and this creates a high demand for gorilla trekking permits that are already limited due to conservation reasons. Therefore, because of this, tour operators advise that travelers book their trekking permits at least 6 months before their intended trekking date. This allows tour operators to purchase the permits in time so that they are ready by the time travelers fly in into the country for their gorilla safari.