Following the 2012 decision by the government to task Uganda’s embassies and foreign missions abroad with promoting the country as a favorable investment, trade and tourism destination, it was not long before the Uganda’s embassy in Denmark together with Uganda Tourism Board (UTB) with facilitation from SN Brussles, saw the exhibition of Uganda’s tourism in Gothenburg in Sweden, Copenhagen in Denmark, Oslo in Norway and the final leg in Brussels in Belgium.

In Copenhagen, the group was later joined by The Director of Tourism at the ministry of Tourism, Ms. Grace Mbabazi Aulo delegated by the minister, MP for Kigulu North, Mr. Edward Balidawa, representing the Cultural Minister and Kampala Woman MP, Ms. Nabila Naggayi Ssempala. Also in the group was the Director of Uganda’s Hospitality, Tourism and Training Institute.

During this week long event, Uganda’s ambassador to Denmark, Mr. Wanume Kibedi Zaake and his Belgian counterpart, Ms. Mirjam Blaak, re assured the group of their embassies’ commitment towards supporting Trade, Tourism and Investment in this region. Mr. Kibedi added that the Scandinavian region contributes 30% of the total tourist arrivals in Uganda hence a big market potential to market Uganda safaris.

However, Ambassador Black called for more private sector engagement in the sector to compliment Government’s promise of increased funding in order to see the industry to another level. It should be noted that the tourism industry has been steadily growing with a 20% growth rate in the last 5 years. Last year, the industry hit its highest mark since 1970s contributing 10% of the Country’s GDP.

While at the exhibition, the CEO of UTB, Mr. Stephen Asiimwe, reminded the people about government’s pledge to increase the sector’s funding five times more than the previous budget fund in the coming financial year and expressed hope that the sector still has a wide room for expansion and better performance.

He further commended the road shows and meetings they held in Brussels and the Scandinavia for their education and awareness about Uganda’s tourism potential to the audiences, adding that they were eye openers to the tourism business and environment. The Ugandan officials held several meetings with different groups from the hospitality training institutes, DANIDA business support agencies, transporters, hoteliers, airlines and tour operators among other business groups.

It was during this event that the group announced Uganda’s hosting of the Africa Travel Association (ATA) congress due to take place in Kampala from November 11th -16th at Munyonyo Commonwealth Speke Resort. 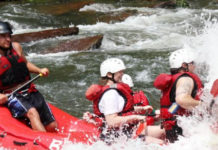