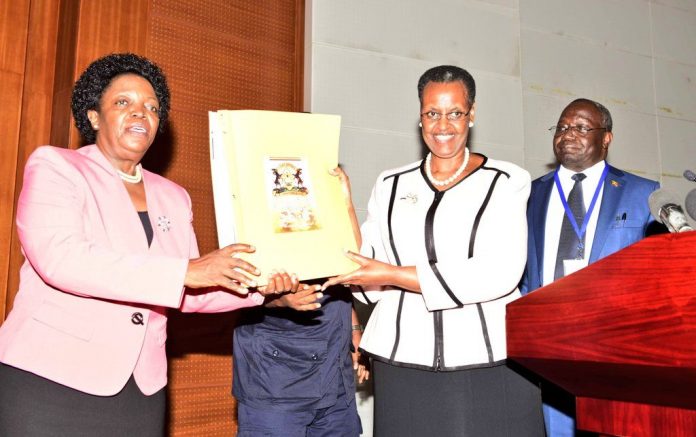 The Uganda National Examination Board (UNEB) has today released the results of the 2018 Uganda Advanced Certificate of Education (UACE).

Mr. Daniel Odongo, the executive secretary of UNEB said that a total of 99,672 candidates sat for the UACE exams in 2018 as he presided over the official release of the results at the Office of the President in Kampala. At least 95, 839 have qualified for the award of the UACE, which represents an improved performance of students compared to the previous year (2017).

Last year, 1,489 students failed the exams compared to 1,141 who failed in 2017. Those who failed will have to resist the exams in order to qualify for the UACE award.

In terms of gender based performance, Mr. Odongo said that female candidates performed better than their male counterparts at the principal level pass in Arts, Physics and Agriculture. However, male candidates were also better in Biology, Chemistry, Art and
General Paper. Out of the total of 99,672 candidates who sat the exams, 53,359 were male and 41,313 were female.

Better performances have been registered in History, Economics, Entrepreneurship Education, Mathematics, Physics, Chemistry and Arts than the previous year, 2017. Performance in Geography also improved at the A-pass level, however there was a decline in Biology, Agriculture, Literature in English and CRE according to Mr. Odongo.

Candidates from the main traditional schools and a few well established private schools have registered good performance compared to their counterparts in ordinary schools. Mr. Odongo also added that these candidates demonstrated adequate knowledge of the subject matter.

On the same note, Mr. Odongo also said that at least 91 candidates will not receive their results after they have been withheld by UNEB due to malpractice. He said that this number of candidates represent 0.09 percent of the total candidates from 21 centers.
“The most common forms of examination breaches have been external assistance”, said Mr. Odongo.

The board will accord a fair hearing to the affected candidates before they make a final verdict.

Meanwhile, the UNEB chairperson, Prof Mary Okwakol has passed a serious warning to schools and head teachers who issue fake UACE results. She says that these results are purported with the intention of pleasing candidates and parents but warns that such schools risk having their examination centers being canceled.

“It has come to the attention of the board that some head teachers issue fake results which they purport to be UNEB results with the intention of falsely pleasing parents. The board strongly warns those engaged in this illegality that they risk having their examination centers withdrawn”, said Prof Okwakol.