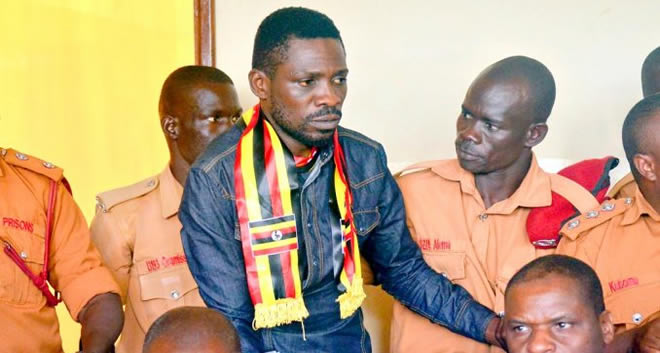 Bobi Wine’s release comes after spending two weeks in detention since he was arrested from Arua.

Last week on Thursday Bobi Wine had seen his charges of illegal possession of firearms and ammunitions dropped by the Court Martial, which subsequently set him free only to be rearrested by the police and handed over to the Magistrates Court in Gulu where he was charged with treason.
The court remanded him to a prison in Gulu after being told to reappear today to consider his bail application.

According to his family led by his wife Barbie Itungo, MP Bobi Wine is to be first taken for treatment due to his poor health condition. The MP was driven out of the court premises in an ambulance, which confirmed the weak state of his health.
The MP’s poor health condition has been evident throughout his court trials as he has been moving using crutches and with support from others. The MP is said to have been severely beaten and tortured by the security forces after his arrest in Arua two weeks ago.