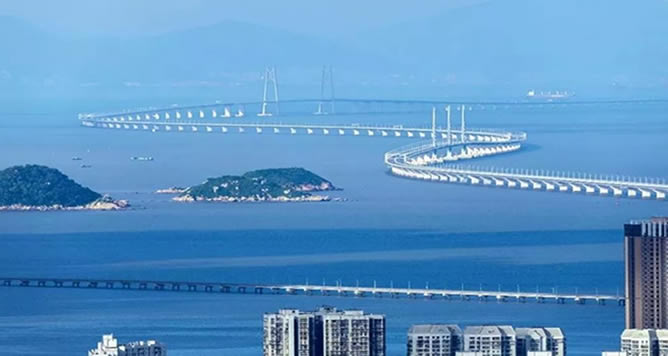 The new bridge links Hong Kong to Macau and the Chinese city of Zhuhai.

The President of China Xi Jinping and the leaders of Hong Kong and Macau on Tuesday attended the opening ceremony in Zhuhai of the 55km bridge.

The project that cost about $20bn started nine years ago and it was supposed to be completed back in 2016 but it was extended due to repeated delays.

During the opening ceremony, digital fireworks were exploded on a big screen as the President and other leaders watched. Limited bus services are expected to begin on Wednesday.

The spectacular bridge that was built using 400,000 tones of steel is capable of withstanding earthquakes and typhoons according to its designers. It crosses the sea of the Pearl River delta with about 30km of its total length while another 6.7km section was constructed in the middle dipping into an undersea tunnel that runs between two artificial Islands to allow ships through.
There are link roads, viaducts and land tunnels connecting Zhuhai and Hong Kong to the main bridge.

The construction of the bridge comes as the partial fulfillment of China’s plan to create a greater bay area that includes Hong Kong, Macau and nine other cities in Southern China, an area which currently inhabits over 68 million people. The bridge is going to ease travelling between Zhuhai and Hong Kong with the reduction of up to three and a half hours of travelling time between the two areas.

However, there is limited access in the transportation along the bridge. Those who want to cross it are required to obtain special permits that are allocated by a quota system while all vehicles will pay a toll. There is no public transport and rail link at the bridge, only private shuttle buses can access it.

Unlike the initial plans by the authorities to allow 9,200 vehicles cross the bridge daily, the estimates were later lowered with the construction of new transport networks around the bridge.

In order to control accidents on the bridge, there are special cameras installed to be on the lookout for drivers who may appear not to be sober and to conduct other checks. Anti-terror police patrols are on alert to help counter potential terror attacks.

Although in Hong Kong and Macau cars are driven on the left, the drivers will have to change the side at the bridge since it is in Chinese territory. Special merger channels were built to help these drivers cope up with this.

There have been some negative aspects that came with the construction of the bridge concerning the environment. According to environmental groups, the project is likely to have caused serious harm to marine life in the surrounding waters with the critically rare Chinese white dolphin feared to be the major victim. According to the Hong Kong branch of the World Wide Fund (WWF), there has been a drastic decrease in the number of dolphins seen in Hong Kong waters from 148 to 47 in the period when the bridge was being constructed.

According to Chinese officials, the bridge is expected to recoup its construction costs by generating up to $1.44 trillion for the economy though some doubts were cast about how this will be possible since not many cars are using it.