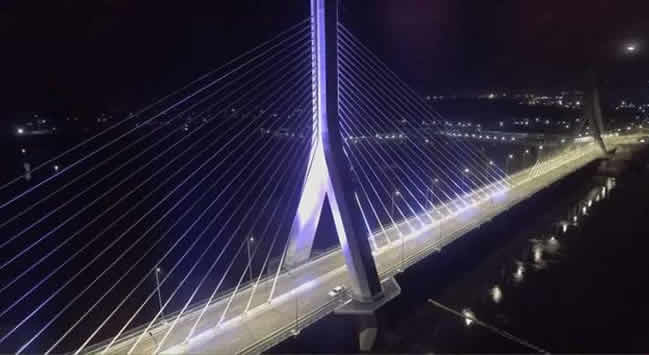 The new bridge, which is expected to last for 120 years, is linked to the main land by a new 0.8km road that has been constructed from the Nile Breweries plant roundabout and a 1km surfaced road that connects back to the old highway at the junction of Igar fuel station.

This mega project is expected to provide a safer and modern crossing as an alternative to the old Owen falls Dam Bridge was fully funded by the government of Japan for Shs313b.
The crossing provided by the bridge at Jinja highway is so vital to Uganda because it is an import-export route going up to Kenya. Uganda being a landlocked country relies heavily on this route that connects to the Mombasa port in Kenya, which handles most of Uganda’s export and import traffic.

The completed project also provided hands on skills to over 50 Ugandan engineering students who were training as interns in addition to very many Ugandans who were employed as engineers, expatriates, crushers and laborers during the four years of the project.

The engineers of the project say that they are very excited by its completion and also reassure Ugandans that they did the best quality assurance and rigorous quality control and tested the construction material with state-of-the art equipment both within and abroad from Singapore and Japan.

The main constructors of the bridge Zenitaka Corporation and Hyundai Engineering and Construction Company from Japan and South Korea respectively erected to name it The source of Nile Bridge due its proximity to the upstream point where River Nile flows out of Lake Victoria.

The bridge is supported by stay cables which according to Dr. Hiroshi Akiyama, a Zenitaka engineer, hold and hang the girder and support both human and vehicle traffic weight.
Lightening arresters have also been installed from the deck to each tip of the pylon tower to protect against lightening.

According to transport minister Ms. Azuba, there will be no toll on users of the new bridge unlike the recently commissioned Entebbe expressway that connects Kampala to Entebbe Airport. The minister also added that the old bridge astride Owen Falls Dam will be used by pedestrians, motorcyclists and bicycle riders.

There was huge excitement among the residents near the bridge when a trial illumination was conducted on Monday night that lit up the sky by the 72 stay cables that are powered by the 202 Lighht-Emitting Diodes (LED) bulbs at the base of the cables. This kind of illumination will be conducted only during national ceremonies through a computersised lighting system and it is billed to be a huge tourist attraction according to officials.

Ms. Azuba says that the new 0.8km road that has been constructed from the Nile Breweries plant will be used to divert all motorised traffic to the new bridge leaving the old one via Nalubale Dam for motor cyclists.

For safety of the bridge and accident control purposes, there are four cameras that have been installed to take photograph of each approaching vehicle while a truck measured in motion to be overloaded will automatically trigger the cameras to photograph the number plate of the truck. The cameras will then send the data captured to Uganda National Roads Authority (UNRA) Central Information System for enforcement.