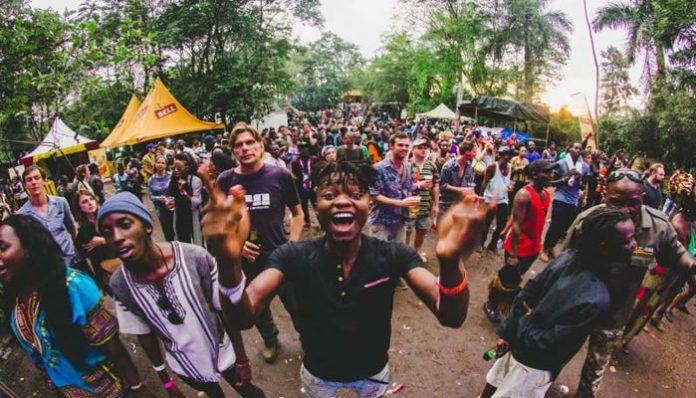 The much-reveled annual festival of Nyege-Nyege in underway today at Nile Discovery Beach up to 8 September.

The four-day festival will feature a variety fun activities including music, dance, eating and drinking. Among the variety of music genres to entertain revelers at the event include Afro-house, Kudros, Kwaito, hiplife, zouk bass, tuarege, among others.

According to the organizers of the event, the festival is aimed at empowering Ugandan creative industry and promoting the country as a home of creativity.

“The festival has over the years contributed tremendously not only to the government but the locals too, in terms of creating employment before, during and after the event”, said Derrick Debru who is a co-founder of the event.

What to expect at the event?

Over the years, Nyege-Nyege has been known as an event where music enthusiasts go to quench their thirst and this year will not be any different.

The music artistry at the event sees musicians coming together from different corners across the continent. There are five stages where over 300 artists will perform to the audience

This years’ event, unlike the previous ones that have been featuring more of underground musicians, revelers will also enjoy music from top local artists like Sheebah Karungi and Pallaso.

Dancing at the Nyege Nyege festival has always been one of the major attractions as dance artist are always joined on the stage by other dancers from the audience and they battle it out till the end.

There will be disco dance artists like Moss Trix, Erik Sama, Eric Egesa, among others whom fans will be looking forward to join on the stage.

A variety cultural performances are showcased at the festival with cultural groups from across Uganda given a platform to perform. The cultural performances usually catch the attention of tourists who attend the event as they get chance to watch a variety of performances from different tribes that in actual sense they wouldn’t find in one place even with their money willing to pay.

What is Nyege Nyege all about?

According to the organizers of the festival, Nyege Nyege stands for peace, love, and abundant joy. They add that the event also stands for fun and curiosity for underground music, and musicians in Africa and those who want to know the continent better.

The organizers always want to push boundaries with a sense of inclusivity and an invitation to wonder. They want fans to have the best time of their life in those four days as they discover more about Uganda, the Peal of Africa.

When and how did Nyege Nyege festival start?

Nyege Nyege started as an act of sheer collective madness in the rainy season of 2015 though it has since moved to the dry season.

The festival has drastically gained popularity since its inauguration and now it is considered the most important 4-day international music festival in East Africa.

The management and organizers of the event underline that the primary purpose of Nyege Nyege is to showcase all the exciting developments on the East African scene, promote darling projects and give a real voice to the underground to attract both revelers and musicians alike.