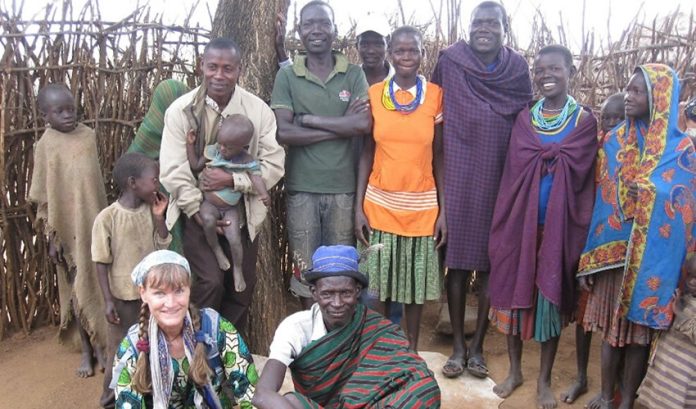 Karamoja is in the north-eastern part of Uganda along the border with South Sudan to the north, the Rift valley around Lake Turkana in Kenya to the west and mount Elgon to the south. Covering about 27,200 sq.km, the region has semi-arid climate with seasonal rainfall and semi-arid savanna plains punctuated by volcanic mountains and rocks kopjes.

It’s the opposite side of the green and fertile south-west Uganda. There are several districts that form Karamoja including Abim, Amudat, Nakapiripiti, Kotido, Napak, Kaboong and Moroto with the largest urban center – Moroto town. These areas are inhabited by the Nilotic ethnic tribes who are largely semi-nomadic pastoralists including the Karamojong (the majority) among others such as the Pokot, Matheniko, Bokora, Pian Tepeth, Jie, Dodoth, Teutho (IK bush men) among others.

They belong to the Nilotic language family and are closely related to the Masai, Luo and Dinka in the neighbouring Kenya, Tanzania and South Sudan. Most of these tribes especially the Karamojong are patriarchal in nature and elders are the ones that lead the community and teach young boys plays to preserve the culture of their forefathers. They take pride in herding their cattle as livelihood and a measure of wealth in society.

Traditionally, men must own as many heads of cattle as possible to pay pride price and the stronger tribes would often raid cattle from their weaker counterparts. The practice of cattle raiding in Karamoja region in particular is a tradition that has through history changed to be violent. People depend on milk and dairy products such as ghee as staple foods. However, they also practice hunting and cultivation of grains to a smaller extent. Due to the strong cattle culture, these people have for centuries lived a semi-nomadic lifestyle in which they must move from place, season after another in search of water and pasture due to persistent drought. As such, land and water are the most important resources and therefore any changes in land ownership means disruption of their traditions.

Since the arrival of Europeans and the subsequent introduction of Christianity, education, politics, taxes, a lot has happened in the Karamoja land. The social unrest today could to a higher extent related to the resistance the tribes might have put against some of the social-economic changes. For instance, the government of Uganda has been encouraging them to move away from their ancestral lands through creation of protected areas such as Kidepo Valley National and Pian Upe Wildlife Reserve in the 1960s. The highlights for travelers visiting Karamoja is to take game drive safari, bush walks in either of the destinations as well as go to a local homestead to learn their way of life including Karamoja breakfast.

Tourism development a challenge to the locals

Tourism has great potential to bring good infrastructure, protect the environmental, preserve their culture preservation and create alternative source of livelihood other than depending on cattle. However, the creation of several protected areas shortly before Uganda’s independence which the sector depends is cited to have led to loss of land and largely restricted free movements of the pastoralists.

It should also be noted that some of the tribes who mutually depended on each other were politically divided during the colonial period as boundaries were marked between independent states of Uganda, Kenya and South Sudan. The political division carried on in the post-independence governments. For instance, president Idi Amin after capturing power from Obote (I) established military control of grazing lands around Mount Moroto. When Amin was overthrown in 1979, the Karamojong and other rival tribes had opportunity to acquire guns from Moroto army barracks and reportedly learnt how to make hand-made guns therefore setting ground for violent armed conflicts including cattle raiding and struggle to access land and water for their animals.

Even though cattle raiding was a tradition it wasn’t that violent. In an attempt to regain control of their lost grazing areas, increase cattle and expand territory, conflicts emerged between the Karamojong with violent crashes against other neighboring communities in Teso and Lango through which civilians lost their lives and raping of women was reportedly committed by cattle warriors. It’s also cited in paper titled “The Karamojong: A pastoral People Under Colonial Rule” published 22 January 2009 in the Journal of African History that the Ugandan pastoral groups such as Matheniko and Pokot were being attacked by the Turkan from Kenya and therefore had to defend themselves further increasing cross-border insecurity.

After the fall of Idi Amin, the Obote II government put in place military units to stop the Karamojong from raiding the Iteso and Lango. This wasn’t successful given that president Obote was under threat by the National Resistance Army (NRA) which waged war against him in 1980. Many people from pastoral groups especially Karamojong joined the guerrilla war which captured power in 1986 that brought His Excellency president Museveni to power until today. After the war, they went back with more guns and a fresh outbreak of armed cattle raids and insecurity worsened in Karamoja between 1986 to 2001.

For the love to restore peace and security in the region the NRA government carried out several interventions over a period of time including disarming the armed cattle warriors, controlling gun trafficking, implementing peace initiatives within and across the Kenya-Uganda cross-borders. On top of resolving the cattle conflict, there were long standing challenges to deal with including persistent drought and water scarcity, hunger and starvation as well as provision of health care services.

In that regard, Karamoja became a focal point of so many government programs, non-governmental and community-based organizations seeking to restore peace, increase water access for both livestock and humans, improve physical infrastructure among others. The Karamoja Integrated Disarmament and Development Program (KIDDP) was established in 2007. This came after more than 10,000 guns were collected in several Karamoja disarmament phases between 2001 – 2002, 2003 to 2006 and onwards. There was peace for business and people to operate.

Land belongs to Ugandan citizens, according to Article 237(1) of the Constitution, and Article 26(1) protects the right to own property either individually or in association with others, such as groups of people who hold land communally (Handbook on Land Ownership, Uganda). In particular, the people in Karamoja traditionally handled their land under a communal tenure system.

Given that there are different pastoral and non-pastoral tribes, land wasn’t equally owned in which some have huge portions than others. A noteworthy change occurred in 1965 land reforms in which almost 95% of Land in Karamoja was reserved for conservation. The protected areas which were created including Kidepo Valley National Park, Pian Upe Wildlife Reserve in the area where Pokot and Pian tribes live, Matheniko-Bokora Wildlife Reserve where the Matheniko dwell and Karenga Mountains Wildlife Reserve.

The locals could no longer access these conservation areas putting large portions of land into the hands of government rather than communities. This meant that the state had rights to give land to investors including several NGOs that were delivering aid, promoting peace and development into the region. This caused a lot of tension between government and pastoral groups over land rights. To put some relief, in 2002, the authorities reduced by 53.8 % the total conservation area land. Now to the state owns about 40.8% of Karamoja land according to a survey conducted between by the International Work Group for Indigenous Affairs and the African Commission on Human and People’s Rights in 2003 and April 2016, respectively.

The issue of mineral resources

Furthermore, over the time the government of Uganda discovered that Karamoja is rich in mineral resources including gold, uranium, limestone, copper among others. Although the quantity of these minerals isn’t clearly known yet, the presence of over 20 different minerals was confirmed during the Uganda Chamber of Mines and Petroleum (UCMP) aerial mineral survey in 2011.

Several mineral development companies expressed interest and huge chunks of land were given to mining companies both local and foreign to explore mineral resources. Some of the mining companies include Tororo Cement, Leadway Uganda Limited, a marble mining company, Samit Group Limited deals with marble stones in Moroto.

Harms Investment deals with gold mining in Lopedo in the Kaabong district; the African Leg Investment deal with limestone excavation in Moroto among others. Besides the mining sector, there are other sectors operating in Karamoja such as Ministry of Water and Environment, Transport and Health.

However, the mining sector has been the most targeted recently by gunmen attacking workers at different sites which have forced investors to flee. The news reported by the Independent Uganda News Paper indicate that three geologists lost their lives earlier this year and insecurity has continued to rise in Moroto and Kabong districts.

That the local youth among the pastoral communities accuse the government of stealing their land resources despite claims that mining sectors provides revenue on sub-county level. Given that the land owned by pastoralists continues to diminish, they are forced to sell their cattle to find alternative ways of survival. “Cattle rustlers have now turned against looting and killing people says Joseph Okurut a resident of Rupa Sub- County in Moroto district because there are no more animals to raid.” According to Michael Longole, spokesman for the Karamoja Regional Police, joint security forces are working hard to ensure that investors are safeguarded. This means that tourism is still ongoing for those intending to visit Kidepo or Pian Upe Wildlife Reserve.