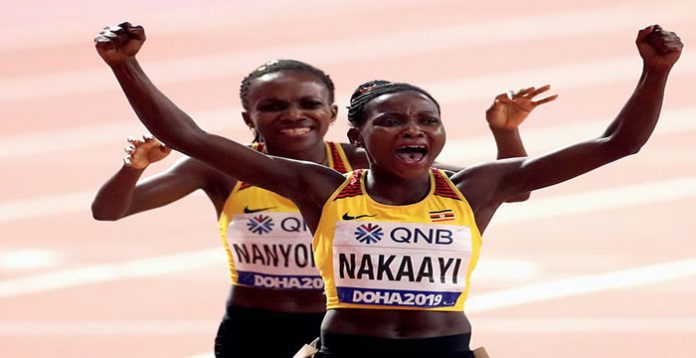 Uganda’s team of athletes at the IAAF World Championships in Doha, Qatar has continued to perform well in various disciplines.

Early this week, Halima Nakaayi won Uganda’s first gold medal at this year’s Championships after clocking one minute and 58 seconds in the women’s 800m final at the Khalifa International Stadium in Doha.

Yesterday, two other Ugandans also continued to add more pride to the Pearl of Africa with Winnie Nanyando qualifying to the finals of the women’s 1500m while Ronal Musagala, the national 1500m record holder is also through to the semifinals of the men’s 1500m.

Musagala was placed in Heat 3, which was the last of the 3 qualification rounds and he and his rivals were advantageous to have watched the first two groups race giving them what to do in their final race.

Heat 1 was won by Norway’s Jakob Interrogation at 3:37.67 who was closely followed by all the seven runners in the group who also managed to register 3:37 mark.

Musagala’s group was the fastest of all the three Heats and the Ugandan had to press a little harder to squeeze himself into the sixth place avoiding being part of the mathematics of determining next six fastest finishers.

Musagala is ow warming up for Friday’s semifinal which will kick off at 8:05pm local time.

Nanyondo booked her place in the final of women’s 1500m after coming number one of the two non-automatic qualification spots.

Nanyondo had finished fourth on Monday in the women’s 800m final which was won by her compatriot Halimah Nakaayi, turning her focus on the longer race. She will hope to qualify for Saturday’s final at 8:55pm local time.

The gold medal won by Halimah Nakaayi on Monday saw her becoming the first Ugandan woman after Dorcus Inzikuru to become champion at this international event. The prize is also Uganda’s first middle distance medal at track. Her one minute 58 seconds saw her bag the $60,000 (Shs218 million) winner’s prize.

Dorcus Inzikuru, the other female Ugandan to win gold at the event was champion in the steeplechase in the 2005 edition in Helsinki.

Peruth Chemutai, another Ugandan who represented the country in the women’s steeplechase final finished fifth. The race was won by Kenya’s Beatrice Chepkoech who opened up with a long gap right from the start going on to take the $60,000 winner’s prize.

Nakaayi and Nanyondo went to Doha in the best form of their career and the duo opened up the championship by claiming the first and second spots respectively.

Earlier in the build-up to the championships, Nanyondo had twice broken the national record of 1500m following setting new national 800m, 1000m, and mile indoor records.

Nakaayi had also set a new national record of 1:58.39 in the 800m and she followed it up with another one in the mile of 2:34.88. Her ambition for a medal in Doha was underlined when she won bronze in All African Games in Rabat, Morocco.

Previous winners at the championships

Nakaayi’s gold medal will be added to those won by her predecessors for Uganda from the championships. Davis Kamoga won silver at Athens in the 1997 edition becoming the first Ugandan to win a medal at the championships. Dorcus Inzikuru won gold in the steeplechase in Helsinki in 2005, Moses Kipsiro was a bronze winner in Osaka in 2007 before Stephen Kiprotich’s famous marathon gold medal in Moscow in 2013 while Solomon Mutai won bronze in the corresponding event in Beijing in 2015 and Joshua Cheptegei was the latest Ugandan medalist before Doha after winning silver in London in 2017.