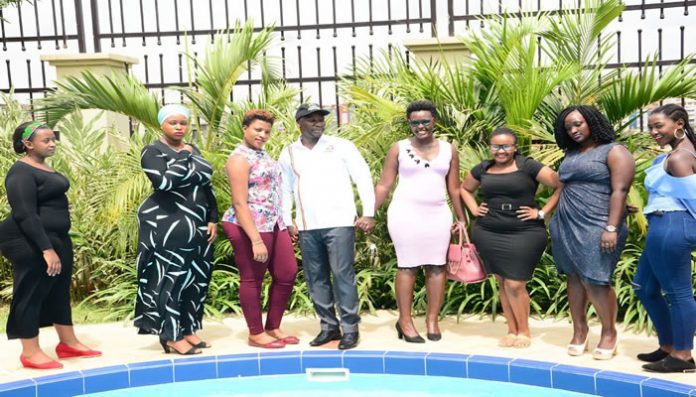 The plan to add curvy and sexy women to the list of tourist attractions in Uganda has turned controversial after seeing a series of criticism directed towards it.

“We have naturally endowed, nice-looking women that are amazing to look at. Why don’t we use these people as a strategy to promote our tourism industry”’, said the state Minister for tourism Godfrey Kiwanda pointing at a group of curvy contestants at the stage during the launch of the event in Kampala.

However, since the launch of the event, angry rebukes from various sources including the ministry of ethics and integrity, parliamentarians, women rights activists, religious leaders and the general public.

Some members of Parliament have demanded that the minister comes out and apologizes to the public.

Mr. Kiwanda had officially launched the “Miss Curvy Uganda” beauty pageant on Tuesday and the campaign to register contestants had kicked off immediately. The contest was part of the “Tulambule” (Let’s tour) promotion that attracts both local and foreign travelers to visit Uganda’s attractions. The finalists of the Miss Curvy Contest were to be selected in June this year.

The chief organizer of the contest, Ann Mungoma, in support of the move says that the initiative was designed to promote and appreciate beauty in Uganda in diversity.

“Miss Curvy is an event that will bring out the endowment of the real African woman. It is an exceptional event that will see young ladies showcase their beautiful curves and intellect”, said Mungoma.

According to the organizers, women aged between 18 and 35 are eligible to contest.

The state minister for ethics and integrity, Simon Lokodo says that the contest cannot happen.
“It’s shameful”. I strongly condemn it. It demeans women and completely destroys their integrity. You can’t bring people from abroad to come and see the physiognomy of your women. It is not different from the striptease that they put in bars and lodges. It completely reduces a woman to toys of entertainment”, said Lokodo.

Apart from the curvy and sexy ladies, minister Kiwanda has used socialites including Zari Hassan and Anita Fabiola as faces of the “let’s tour” promotion.

In another related case, Kenyan TV personality Grace Msalame who claims that the organizers of the contest used her image for promotion, has vowed to sue them for abusing her image rights. Although Msalame says that she was not aware of the campaign, she strongly opposes the idea of using women’s bodies that way.

Ms. Rita Aciro, the executive director of the Uganda Women’s Network called upon the Minister to resign for “dehumanizing” and “degrading” women.

“it’s a shame to women and girls of Uganda. It’s an exposure of scant knowledge of his job and what it takes. Common sense tells you tourism is not promoted using women’s bodies. Women are not sex objects”, said Aciro.

“Ugandan women have offered better for this country. He should apologize to Ugandans and should resign his position. The government should disassociate itself from the minister”, she added.

Currently the tourism industry is Uganda’s highest foreign exchange earner. The sector fetches approximately $1.5bn a year with wildlife safaris in the country’s national parks as the major contributor.